BritBox appoints EE as exclusive mobile partner | Mobile | News | Rapid TV News
By continuing to use this site you consent to the use of cookies on your device as described in our privacy policy unless you have disabled them. You can change your cookie settings at any time but parts of our site will not function correctly without them. [Close]

Creating a partnership that the two companies say is a combination of the UK’s best wireless network with the best of British content, UK telco EE has become the exclusive mobile partner for the subscription video-on-demand streaming service BritBox. 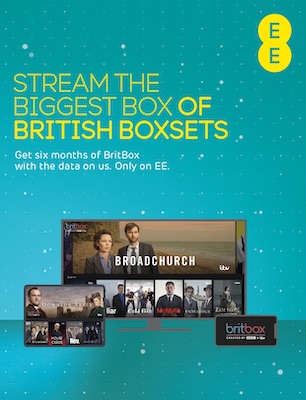 The SVOD service was established by the BBC and ITV and launched in the fourth quarter of 2019. BritBox claims to provide an unrivalled collection of British films, documentaries, boxsets and original series available on-demand. Box sets include Top Gear, Downton Abbey, Happy Valley and Gavin & Stacey, with many box sets including Cold Feet, Classic Doctor Who, Shetland and Broadchurch which are unavailable on-demand anywhere else.

It also offers new commissions from British production companies specifically created for the service. ITV and the BBC say that they will provide a new and regular flow of fresh programmes as soon as they come out of their broadcast and catch-up windows. The latest to sign on include Viacom’s Channel 5.

The deal with EE begins on 13 March and will see the telco’s pay monthly mobile and tablet customers across the UK will receive a six-month subscription to BritBox with inclusive mobile data without impacting data allowances.

BritBox is also the latest addition to Entertainment on EE, a collection of offers which gives EE pay monthly mobile and tablet customers access to premium services including BT Sport, Apple Music, Apple News+ and MTV Play, with up to six months of access for free, worth up to £220.

Commenting on the deal, Marc Allera, CEO of EE parent company BT Consumer, said: “The UK is the birthplace of some of the most iconic TV shows in the world – from Top Gear to Downton Abbey. By partnering with BritBox, we’re giving our customers access to the best British dramas, comedies and films, so they can stream them wherever they are, at home or on the move, thanks to our superfast 4G and 5G mobile network.”

Will Harrison, MD at BritBox, said: “It’s a match made in heaven – the biggest collection of British box sets together with the biggest network. Now it is easier than ever to sign up to BritBox, whether you watch on the go, or on the big screen in the comfort of your living room.”