Two-fifths of US streamers drop service through lack of use | Media Analysis | Business | News | Rapid TV News
By continuing to use this site you consent to the use of cookies on your device as described in our privacy policy unless you have disabled them. You can change your cookie settings at any time but parts of our site will not function correctly without them. [Close]

Two-fifths of US streamers drop service through lack of use

The clamour to get involved in the streaming boom is certainly growing louder, but when it comes to determining successes and failures, the consumer is the ultimate decider and they are not shy of pulling the OTT plug says a dedicated streaming edition of the Nielsen Total Audience Report. 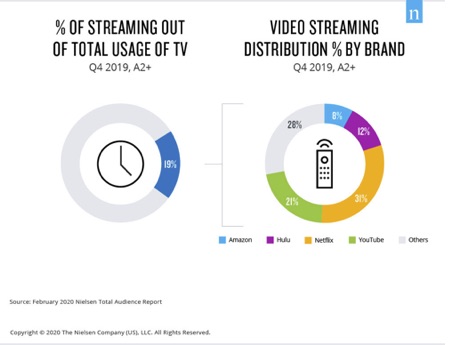 The new study aimed to highlight cross-media fragmentation and consumer time spent over traditional and nascent technologies. In addition it attempts to provide direction into the many media choices consumers have and how they may be taking advantage of those choices.

In its report the analyst says that a new age of media has dawned and that as a number of powerful media companies enter the streaming video marketplace in a very big way, choice has never been greater.

Overall, the study found that consumers in OTT-capable homes are spending 19% of their TV time streaming content, be it through ad-supported or paid subscription models. Of this Netflix accounted for 31% of this time, followed by YouTube (21%), Hulu (12%) and Amazon (8%). Moreover, the report also found that 60% of Americans subscribe to more than one paid video streaming service and 93% of US consumers say they will either increase or keep their existing streaming services.

Yet looking at behaviours of streamers, Nielsen found that they were not too different from traditional TV customers. According to survey respondents, price is the most vital attribute for a quality streaming service. This said Nielsen, puts the impetus on platforms to satisfy customers’ return on investment while being affordable enough for the rest of their media habits. When asked about what made them cancel a paid video subscription service, 42% said they didn’t use it enough to justify the cost.

User-friendly interactivity ranked second in consumer importance and the analyst noted that frustrating user experiences or hard to navigate interfaces may not bode well when it comes to subscriber retention, especially when the internet has cultivated a culture of convenience and consumers have a bevy of other media choices available to them.

Content variety and availability was also placed in the top three of video streaming attributes. Indeed the study confirmed that even though there are a number of reasons why streaming services are attractive to users, it was content that what ultimately got them to subscribe. The top four reasons as to why survey participants decided to subscribe to additional streaming services were all content-based, with the top reason being to expand the content that they had available.

Summing up the findings shown in the Nielsen Total Audience Report, Nielsen said: “Content has always been king, but with the growth of streaming, content creators and rights owners are effectively given more power. Platforms must be able to maintain the programs that audiences want while offering compelling new ones to keep them interested. Wherever good content goes, subscribers will follow. When that content runs out, don’t be surprised when some of the subscribers do too: 20% of consumers said they cancelled a service after watching all the content that they were interested in."

The research firm predicted that those platforms that cold adapt to the marketplace would likely rise to the top. It warned that should they not continue to evolve nor expand their content libraries, then consumers just might replace them.