NineTNine cooks up culinary content collaboration with Samira TV | Programming | News | Rapid TV News
By continuing to use this site you consent to the use of cookies on your device as described in our privacy policy unless you have disabled them. You can change your cookie settings at any time but parts of our site will not function correctly without them. [Close] 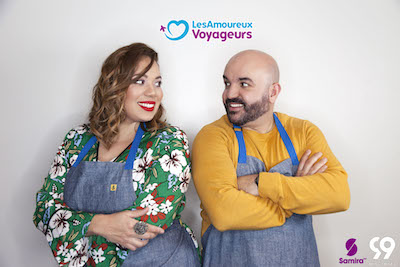 In the first part of their collaboration, the two companies have produced the first French-Arab TV show, Ezawj Errahal presented by French travel and food social media influencers Salim and Linda, known as ‘the travelling lovers’ (Les Amoureux Voyageurs). Salim and Linda were the winners of the French popular TV competition format Pékin Express, which aired on M6 and attracted multi-million daily viewers. They became social media superstars and decided to travel the globe to meet people, discover new cultures and share their stories.

Fittingly, the 13-episode series launches on Samira TV on 14 February and will also be available on-demand and via OTT on Le Bouquet Maghreb, the popular Arabic TV package in France. The format claims that it will deliver an exciting, new TV cooking concept that will take viewers on a culinary trip around the world, allowing them to learn simple, original recipes created by Salim and Linda while on their adventures.

Commenting on the production, Samira TV CEO Samira Bezaouia said: ‘’We are constantly innovating to propose new TV experiences for our viewers in line with current and future trends. We have produced this new show with our forward-thinking partner NineTNine and we believe it will be of interest to a multi-generation public in the Arab world, Europe and North America.”

In a joint statement, NineTNine co-founders Adel Hamla and Samir Zehani, added: “This is an exciting opportunity for us to propose a fresh and disruptive TV show, with social-media stars who know how to engage with their fan base. Salim and Linda are warm-hearted people and their amazing travel experience is a natural fit with a cooking-style show. We are convinced that there is a bridge between a core audience in MENA and a dynamic diaspora in Europe and North America. Our challenge was to create a premium concept appealing to different generations, nationalities and cultures.”