All-screen approach attributed for Australian Open engagement uplift | Ratings/Measurement | News | Rapid TV News
By continuing to use this site you consent to the use of cookies on your device as described in our privacy policy unless you have disabled them. You can change your cookie settings at any time but parts of our site will not function correctly without them. [Close]

Eurosport is claiming that its approach of serving fans across multiple platforms has reaped rewards with substantial year-on-year digital and linear growth for its coverage of the Australian Open. 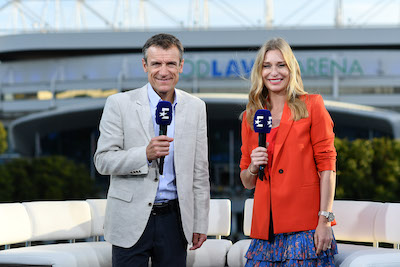 After registering what it said was record digital and viewing engagement numbers at Roland-Garros and the US Open in 2019, the Pan-European sports service claims that the trend has continued at this year’s Australian Open with a 35% uplift in unique visitors on Eurosport.com, for both web and app.

At the same time Eurosport’s social media channels were said to have received a 76% uplift in engagement numbers versus 2019, boosted by YouTube (+220%), Facebook (+75%) and Instagram (+62%). Fans across Europe consumed 49.9 million minutes during the tournament fortnight , up 105% compared with 2019, contributing to 35 million video views, an increase of 78% versus the same period in 2019.

The statistics also showed that coverage of the Australian Open on Eurosport 1 also increased 4% year-on-year versus 2019 — in the leading markets of markets – Denmark, France, Germany, Italy, Netherlands, Norway, Poland, Romania, Spain, Sweden and the United Kingdom. Double-digit growth was reported on Eurosport 1 in Germany (+26%), the Netherlands (+26%), Spain (+24%), UK (+18%), Italy (+10%), Sweden (+12%) and Norway (+60%). Audience numbers recorded in the Netherlands contributed to the best Australian Open ever with the men’s final the second most watched tennis event on Eurosport in the country.

“We are delighted that the content Eurosport produces continues to resonate with millions of sports fans watching across all screens in Europe Commenting on the results,” said Andrew Georgiou, president, Eurosport and global sports rights and sports marketing solutions. “We’ve listened to sports fans and understand what they want and how they want it with a focus on live, every court available and best-in-class analysis. We pride ourselves on having the most knowledgeable experts and an unmatched heritage in tennis that fans continue to enjoy and engage with.”