Screen Glue confirms first international deal with CBBC | Deals | News | Rapid TV News
By continuing to use this site you consent to the use of cookies on your device as described in our privacy policy unless you have disabled them. You can change your cookie settings at any time but parts of our site will not function correctly without them. [Close]

Jasper James-founded independent factual and kids’ content producer Screen Glue has won its first commission for its comedy science series Hey You! What If with BBC kids’ channel CBBC. 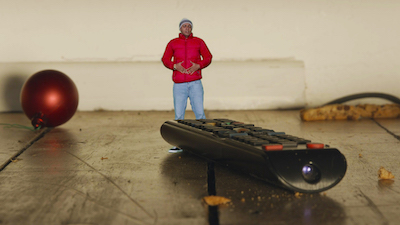 The 26 x 5’ programme aims to provide answers to such questions as “What if... the earth was flat, ...the moon was made of cheese, and ...everything you touched turned to gold”? Combining live-action and photo-real visual effects with motion graphics, each episode features an experiment where the impossible is made real, with even abstract principles such as gravity and sound made highly visual.

At the centre of each episode is an inquisitive character played by Neil Reynolds (Secret Life of Boys), who continually does impossible, crazy things and creates all manner of mischief to see what happens. He is accompanied by the off-screen banter from two narrators – one of whom really knows his science and a sidekick who asks seemingly stupid but insightful questions.

Commenting on the deal, James said: “We are very excited that Hey You! What If... is about to premiere and has already started its journey in the international marketplace...[It] is funny, hugely colourful, fast-paced and throws out some wild ideas that will really spark the imagination of young viewers – and indeed any adults watching with them.”

CBBC commissioning editor, independents Kez Margrie, added: “Screen Glue has created a wonderfully innovative series that reveals how our world works by making it do things it’s not meant to do! Clever thought experiments, real science, brilliant visuals, and terrific humour will succeed in delivering information about the world to our viewers in a truly entertaining and engaging way.”

Screen Glue has signed its first international deal for Hey You! What If..., with Noga Communications in Israel acquiring from Beyond Distribution the series for its Logi Channel. Hey You! What If... joins a growing Screen Glue portfolio of factual series, which includes Size Matters (2 x 60’) for the BBC, ZDF/ZDFE and Arte, and A Day in the Life of Earth (1 x 90’/2 x 45’) for CBC, BBC, France 5 and ZDFE, as well as kids show Quarx (26 x 11’) for Curiosity Stream and Discovery Asia.