Ethnic Channels signs multi-year distribution agreement with TV Asia | Deals | News | Rapid TV News
By continuing to use this site you consent to the use of cookies on your device as described in our privacy policy unless you have disabled them. You can change your cookie settings at any time but parts of our site will not function correctly without them. [Close]

Canada's largest multicultural broadcaster Ethnic Channels Group Limited (ECG) has inked a multi-year licensing agreement with TV Asia for its local market, seeing the service launch simultaneously on five of the largest platforms across the country. 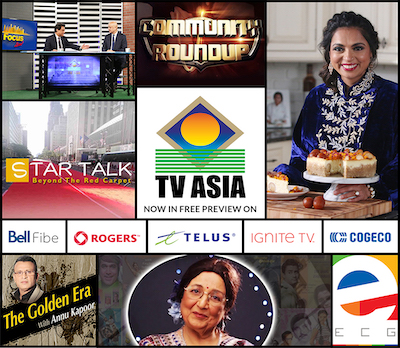 TV Asia is the first coast-to-coast American 24/7 information and entertainment cable television channel specially produced and distributed for the South Asian community. It has 38 bureaux in North America and provides a range of programming in the Hindi language, aiming to be the voice and mirror of the community. Content consists of dramas, music, movies, educational and original live programme.

“TV Asia is the oldest South Asian Channel in North America with a strong legacy," commented Slava Levin, CEO and co-founder of Ethnic Channels Group. The discerning South Asian Viewers in Canada can certainly look forward to hours of exemplary content; entwined with the cultural history from the Indian sub-continent.

“We are delighted with our Ethnic Channels Group partnership in launching TV Asia Canada to focus on the burgeoning Indo-Canadian community,” added Padma Shri Dr H R Shah, chairman and CEO of TV Asia Group.. Given our deep roots in North America for the past 27 years, TV Asia is committed to providing quality programming focused on the culture and traditions of the Indian community in Canada.”