Disney+ to reach 126MN subs by 2025 | VOD | News | Rapid TV News
By continuing to use this site you consent to the use of cookies on your device as described in our privacy policy unless you have disabled them. You can change your cookie settings at any time but parts of our site will not function correctly without them. [Close]

After the announcement by Disney that its fledging direct-to-consumer service Disney+ had exceeded all expectations, analyst Digital TV Research has upgraded its forecasts for the service and expects it now to add 105 million paying subscribers between the end of 2019 and 2025. 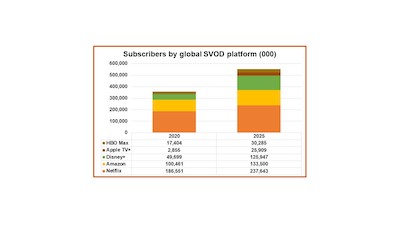 As it revealed its stunning first quarter results, Disney revealed that by 28 December 2019 it had racked up 26.5 million Disney+ customers since the service’s launch on 12 November. In the company’s analyst call on 5 February 2020, CEO Bob Iger added that since then the total now stands at over 28 million subscribers.

Digital TV Research sees Disney+ will be the biggest SVOD winner over the next five years, projecting that the DTC Offer will to take its total to 126 million by 2025. This would represent 53% of Netflix’s expected subscriber total by that time, up from only 27% in 2020. “Much of this initial growth will come from the US, principally due to the attractive bundling of Disney+ with ESPN+ and Hulu,” noted Digital TV Research principal analyst Simon Murray. “ESPN+ and Hulu are not yet available outside the US, but we still expect strong Disney+ take-up globally.

Digital TV Research believes that as many as five global platforms will have 553 million paying SVOD subscribers by 2025, adding 196 million subscribers between 2020 and 2025. The research showed that Netflix will likely gain 51 million subscribers between 2020 and 2025,revealing that there is still growth left for the most established platform. This would see Netflix will command 44% of the 2025 total for the five platforms, down from 53% in 2020.