SVOD surge leads to rise in solo video viewing | VOD | News | Rapid TV News
By continuing to use this site you consent to the use of cookies on your device as described in our privacy policy unless you have disabled them. You can change your cookie settings at any time but parts of our site will not function correctly without them. [Close]

The arrival of direct-to-consumer streaming services and mass availability of connected devices may have led to almost too much choice for video consumers but, says Ampere Analysis, such services are increasingly being consumed on a standalone basis. 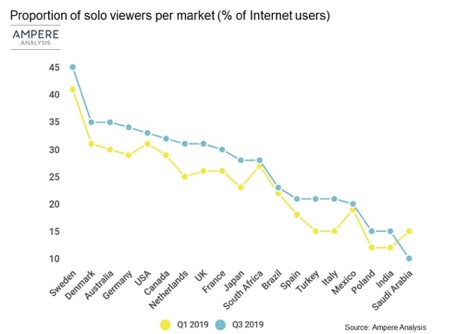 Indeed the analyst notes that the new subscription OTT services are not only driving seismic shifts in the economics of the TV industry but they are also leading to a steady decline in the importance of TV as a social occasion. Ampere adds that despite the fact that some of the biggest ‘water cooler’ shows of 2019 were released on subscription online video services, the numbers of solo viewers are greatest in those markets with highest OTT video usage, indicating that it is specifically the rise of video-on-demand (VOD), and the huge variety in content choices that it enables, that is driving the phenomenon.

The research found that the drive to watch alone was most common in adult-only homes and in developed Western countries, particularly Sweden, Denmark and Australia, where over a third of consumers self-identify as solo viewers. By comparison, there was less solo viewing in emerging markets including Poland, India and Saudi Arabia where just over a tenth of respondents said they like to view alone.

And as subscription VOD penetration continues to rise, and streamers invest more in original programming, and as new platforms such as Disney+, Peacock, HBO Max and others enter the fray each with an array of new and exclusive content, Ampere believes the result will be that the number of solo viewers will continue to rise over the next few years.

Ampere also found a clear correlation across countries, linking SVOD usage and the proportion of consumers identifying as solo viewers. The relationship is especially clear once demographic effects are taken into account, and strongest in adult-only homes – particularly in households where the respondent lives with their partner and no children. Indeed, Ampere additionally revealed that the relationship between online video usage and solo viewing breaks down among households with children.

“The rise of SVOD services has resulted in a plethora of content hitting our screens. Accessibility through devices such as tablets and smartphones mean viewers can watch whatever they want, whenever they want,” said Ampere Analysis analyst Minal Modha. “This means watching alone has never been easier. As new services launch and existing services create content customised perfectly to their audiences, we believe solo viewing behaviour is a theme which will only grow further in importance.”
Tweet