Disney+ grosses nearly $100MN on mobile in its first two months | VOD | News | Rapid TV News
By continuing to use this site you consent to the use of cookies on your device as described in our privacy policy unless you have disabled them. You can change your cookie settings at any time but parts of our site will not function correctly without them. [Close]

Only just more than two months into its operating life, the Disney+ direct-to-consumer service can already be described as a roaring success and in addition to breaking download records, data from Sensor Tower is showing that the service is raking in the cash especially on mobile. 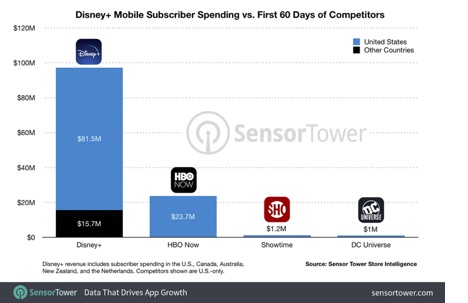 According to the analyst’s Store Intelligence data, the service’s mobile app has now been downloaded nearly 41 million times across the Apple App Store and Google Play and has generated an estimated $97.2 million in user spending. Not surprisingly, the data showed that Disney+ had the best launch month of all comparable SVOD/DTC apps in terms of user spending.

Sensor Tower also confirmed that this also held true when considering the second month post-launch. Disney+ was found to have generated $43.9 million during its second month, in addition to the $53.3 million it made during its first 30 days. By comparison, rival services HBO Now and Showtime grossed $23.7 million and $1.2 million during their first 60 days.

Comparatively, 29% of HBO Now’s downloads during its first 60 days came from its second month. Showtime installs were more significantly front loaded, with only 16% of its downloads during a 60-day analysis period occurring in its second month. Taking just US figures into account, Disney+’s first 60-day period still exceeded that of its competitors. As much as 84% of Disney+ revenue and installs were found to have originated in the US.