TeamTO, France Télévisions launch licensing for Mighty Mike, Angelo Rules | Deals | News | Rapid TV News
By continuing to use this site you consent to the use of cookies on your device as described in our privacy policy unless you have disabled them. You can change your cookie settings at any time but parts of our site will not function correctly without them. [Close]

In the first part of a plan a move that will bring in 2020 what its owners describe as the world’s most licensable pug to every major market, TeamTO has joined forces with France Télévisions Distribution to take Mighty Mike to France. 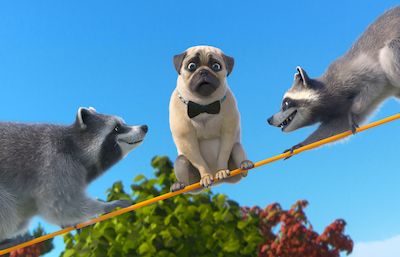 An original TeamTO production with Canada’s Digital Dimension, the dialogue-free chase cartoon features Mike, a refined pug with sophisticated tastes who longs for a quiet life but is instead forced to defend his house from a bunch of furry intruders. Raccoons, turtles and Fluffy the Cat have a knack for showing up at the worst possible moments, dragging Mike into a series of unforeseen twists and turns. The series is distributed by Cake worldwide excluding France, Germany and China.

The new deal not only comes after the slapstick comedy made its UK debut on CITV, the French entertainment company and leading French licensing agency also announced their first book deal with Dragon d’Or Publishing for the Emmy-nominated animated comedy, Angelo Rules.

“2020 will be the year that TeamTO’s original IPs make their mark in licensing, not only in France where our series perform extremely well, but in trend-setting markets such as the US, UK and China,” commented Patricia de Wilde, TeamTO’s VP of marketing. “The combination of having a popular show with very likeable and licensable characters on platforms like CITV, Cartoon Network, Universal Kids and Tencent, among others, is sure to seal Mike’s fate as the most licensable dog in the world.”

Added Aude de la Villarmois, director of licensing at France Télévisions Distribution: “This dazzling Pug has out-performed in its prime slot on France 3 guaranteeing that it will hold an optimal platform in France. The natural licensing playground for Mike are categories that spring from the series' comedy...and that appeal to fans and collectors (plush, mugs, slippers). We also plan to focus on the very extensive pet market in France, including animal care products, toys, and promotions.”

The Angelo Rules deal with Dragon d’Or Publishing will begin off with a collection of comedy/adventure chapter books to be launched in the Spring of 2020, with a plan to extend into other categories such as activity, game and comic books later in the year. A top performing show on France Télévisions, Angelo Rules has aired in over 100 territories.