6x growth for African SVOD over next five years | Media Analysis | Business | News | Rapid TV News
By continuing to use this site you consent to the use of cookies on your device as described in our privacy policy unless you have disabled them. You can change your cookie settings at any time but parts of our site will not function correctly without them. [Close]

6x growth for African SVOD over next five years

The SVOD juggernaut is rolling through Africa and a new study from Digital TV Research is forecasting subscription video-on-demand revenues will soar from now until 2025 to grow from $183 million to $1.055 billion by 2025. 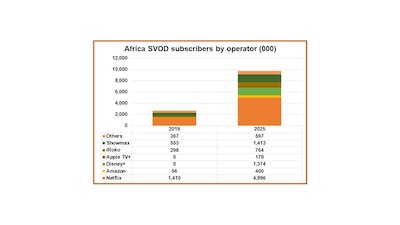 Attributing reasons for the growth, the Africa OTT TV and Video Forecasts report noted that over the last year, there has been a shift from cheap, local platforms towards the multinational players. This it said has meant higher revenues as their prices are higher than local players, but it also keeps subscriber numbers low. Indeed, subscribers are set to increase from 2.68 million at the end of end 2019 to 9.72 million SVOD subscriptions by 2025.

Showmax is likely to have 1.41 million paying subscribers by 2025 – with many more receiving it for free as part of their premium satellite TV subscription. Significantly, Multichoice has a distribution deal with HBO, which is likely to prevent an HBO Max launch in Africa.