More than 80% of 13-24 year olds give out, use other's online TV password | Media Analysis | Business | News | Rapid TV News
By continuing to use this site you consent to the use of cookies on your device as described in our privacy policy unless you have disabled them. You can change your cookie settings at any time but parts of our site will not function correctly without them. [Close]

The arrival of Disney+ and Apple TV+ in late 2019 have given a huge boost already to the subscription video-on-demand market but performance for these services and the existing players would have been even more impressive but for password sharing says a study from Hub Research. 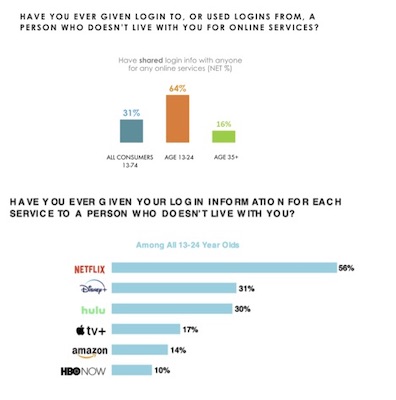 The company’s latest report, Video Redefined, tracked the current most popular video genres and formats among consumers, including non-traditional forms of video entertainment, measuring the methods consumers use to access that content. The study was conducted in December 2019 among 2,050 US consumers with broadband, age 13-74, who watch at least 1 hour of TV per week and included illegitimate methods such as password sharing.

Indeed the study found that in less than two months since its launch, Disney+ already finds itself ranked second on the list of services whose passwords are most likely to be shared with others. While nearly a third of all consumers were found to have given out an online TV service password to a friend or extended family member, the proportion was twice as high among 13-24 year olds. In addition, a similar proportion said that they’d given one of their online TV service passwords to someone who doesn’t live with them.

Not surprisingly, Netflix topped the list of services whose passwords are shared with 56% of all 13-24 year olds having given their Netflix password to someone else and 31% of all young consumers gave out their Disney+ login info. Netflix and Disney+ were followed by Hulu (30%), Apple TV+ (17%), and Amazon (14%).
Yet compared with giving out passwords, viewers were found to be even more likely to use someone else’s online TV password to access services they don’t personally subscribe to, including more than three-quarters of young viewers.  Just over two-fifths of (42%) of all consumers indicated that they had used someone else’s online TV service password to access a service. However, this proportion increased to 78% among 13-24 year olds. Just over two-thirds of 13-24 year olds said that they have used someone else’s Netflix password, compared with 59% for Hulu and 53% for both Amazon and Disney+.

Hub calculated that adding in both giving out and receiving passwords, as many as 81% of young consumers engaged in online service password sharing to some degree. Yet it stressed that the activity was not confined to this cohort: among 35-74 year olds, password sharing was at 29%. The other issue for the industry was that password sharing was an activity done often. Among 13-24 year olds who used someone else’s credentials, the proportion using that password at least every week was 77% for Netflix, 73% for Hulu, 73% for Disney+ and 68% for Amazon.

“Online streaming platforms must love it when one of their original shows generates massive buzz. After all, what better way to attract new subscribers than by offering hugely popular shows you can’t watch anywhere else,” said Peter Fondulas, principal at Hub Research and co-author of the study. “But when popularity and exclusivity are combined with often ambiguous, even sometimes non-existent, rules about legitimate use, it’s almost an invitation to subscribers to share the enjoyment with friends and family. Wall Street has already made its displeasure clear, but in spite of that, password sharing is still very much alive and well.”