Over three-quarters of US broadband households’ smart TVs connected to internet | Media Analysis | Business
By continuing to use this site you consent to the use of cookies on your device as described in our privacy policy unless you have disabled them. You can change your cookie settings at any time but parts of our site will not function correctly without them. [Close]

Research from Parks Associates has found that more than 70% of US broadband households now own at least one streaming entertainment product and half of them own a smart TV. 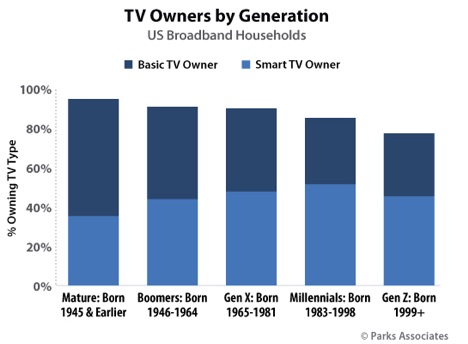 The 360 Deep Dive: Demand and Perception of Connected TVs study surveyed 10,000 US broadband households including an examination of ownership, purchasing, features, sizes, brands, and consumer usage of both smart TVs and basic, non-smart TVs.

The research also found that 90% of US broadband households own at least one television; 50% own at least one smart TV while 40% own basic televisions only. Nearly three-fifths (56%) of recent smart TV buyers purchased a TV with 4K video support. This compared with just a third owning a TV with this feature a year ago.

“Higher connection rates result in greater opportunity in monetising the user base, which is increasingly important as manufacturers and software providers look to extend into subscriptions and ad-supported OTT video services, such as Samsung's new ad-supported video service Samsung TV Plus.”

Parks regards the renewed focus on app development and user experience as particularly important as the younger, Generation Z, cohort starts to mature, as their preferences for entertainment delivery and consumption are markedly different from prior generations. It adds that Generation Z shows a strong preference for other forms of entertainment over watching TV programming, which will represent a growing challenge to TV makers.

“Overall television ownership is beginning to decline, even as smart TV adoption grows," said Hanich. “Millennials and Generation Z collectively represent the largest segment of TV buyers, but their unique demands on the TV are forcing manufacturers to rethink the role and form factor of the TV set.”