Africa to gain 17 million pay-TV subs | Media Analysis | Business
By continuing to use this site you consent to the use of cookies on your device as described in our privacy policy unless you have disabled them. You can change your cookie settings at any time but parts of our site will not function correctly without them. [Close]

African pay-TV subscriber numbers are set to climb by 54% between 2019 and 2025 to 47.26 million, according to a study from Digital TV Research. 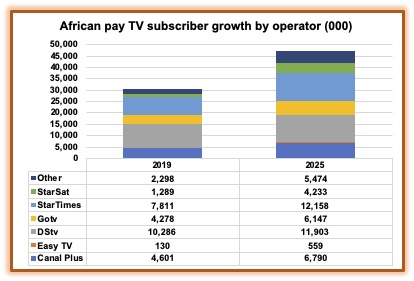 In this rising tide, Nigeria is set to float the highest, contributing ten million subscribers by 2025 after having overtaken South Africa in 2020.

Yet despite the strong subscriber growth, there will not be a huge commensurate rise in business. In African pay-TV, competition is intense with prices and ARPUs falling as rivals fight to gain subscribers. Indeed, the analysis showed that pay-TV revenues will rise by only 31% from 2019 to 2025, indicating that subscribers will pay less. Total revenues are set to reach $7.20 billion by 2025, up by $1.72 billion on 2019.

Looking at the companies that are driving Africa’s pay-TV industry, the report showed that three groups accounted for 93% of Sub-Saharan Africa’s pay-TV subscribers in 2019 but this this proportion is set to fall to 88% by 2025. Each of these three provides a satellite TV platform and a pay DTT platform.

Yet Digital TV Research’s Africa Pay TV Forecasts report identified StarTimes/StarSat as likely to enjoy the most impressive growth, from 9.10 million subs at the end of 2019 to 16.39 million by 2025.