Spanish football at vanguard of DIRECTV 2020 sports offer | Programming | News | Rapid TV News
By continuing to use this site you consent to the use of cookies on your device as described in our privacy policy unless you have disabled them. You can change your cookie settings at any time but parts of our site will not function correctly without them. [Close]

Claiming to be providing to viewers in Latin America the best alternative football from Spain, DIRECTV has unveiled its slate of programming for its DIRECTV Sports channels and DIRECTV GO online service. 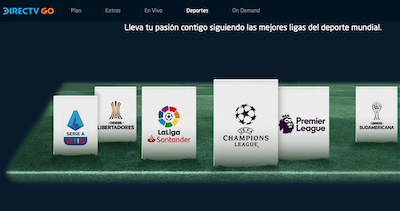 The company claims to be offering exclusive coverage of some of the world’s most popular football teams with games from Spain’s LaLiga Santander and LaLiga SmartBank, with the teams from the country’s second division. For La Liga, DIRECTV Sports has exclusive matches every day, all available online, boasting the highest coverage in HD and users who have the 4K DIRECTV technology will have two games in Ultra HD quality. For LaLiga SmartBank, DIRECTV Sports has 5 games available for this league every match day.

The broadcaster also has coverage of the Copa del Rey, the oldest Spanish football competition and which had a dramatic 2019 denouement in a classic game between Valencia and Barcelona.

The matches will be available online at DIRECTV GO, DIRECTVSports.com and DIRECTV Sports app for customers living in Argentina, Chile, Colombia, Ecuador, Peru and Uruguay.