Proximus selects 3READY Android TV for Pickx TV offer | Infrastructure | News | Rapid TV News
By continuing to use this site you consent to the use of cookies on your device as described in our privacy policy unless you have disabled them. You can change your cookie settings at any time but parts of our site will not function correctly without them. [Close]

Belgium’s largest telco and multiservice provider Proximus, which boasts over 1.8 million subscribers, has revealed that it has chosen the 3READY Android TV solution from 3SS to be at the heart of its Pickx TV offer. 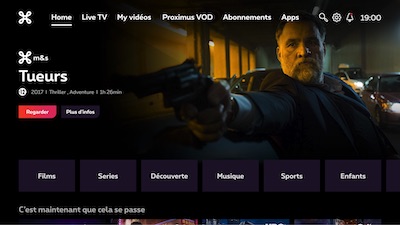 Launched to first pilot customers in October 2019, Proximus Pickx is Europe’s first Android P-based TV project, had its pilot launch in October and is claimed to present ‘state-of-the-art’ user features in a customisable, personalised user experience enabled by 3READY. Features include live-TV, catch-up, VOD and apps including games via cloud and local content in the unified platform.

“We knew that if we really wanted to give our subscribers a truly great TV experience, with all the Android apps they love, plus Google TV Services including Chromecast and Google Assistant, while also being able to launch our own features, we needed to choose Android TV Operator Tier,” said Thierry Demoor, head of applications and service platforms at Proximus. “This has been a game-changer and with the help of 3SS, we are delivering a highly engaging, world-class personal TV service to our viewers.”