YouTube UK surpasses iPlayer | Media Analysis | Business | News | Rapid TV News
By continuing to use this site you consent to the use of cookies on your device as described in our privacy policy unless you have disabled them. You can change your cookie settings at any time but parts of our site will not function correctly without them. [Close]

In its regular look at the online video market, Ampere Analysis has found that YouTube continues to dominate as the most watched service, for the first time since Q1 2016,  attracting in the UK more viewers (57%) than the BBC iPlayer (55%). 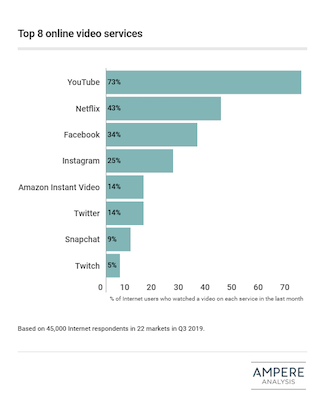 Indeed the analyst found that in every country except China where it lagged behind iQIYI, the Google-owned online video service was the most-watched. In all other territories in the study, Netflix was second placed with, some may regard as surprisingly, Facebook was the third most popular service for watching online video.

The report also showed the underlying strength of the social video industry. It showed that 70% of Internet users in the US and Europe have watched a video on a social video service in the last month - an increase of four percentage points since the same quarter in 2018. Although the proportion who have watched a video on an SVOD service is lower, at 55%, this represents an eight point increase over the last year.

Commenting on the report, Minal Modha, consumer research lead at Ampere Analysis said: “The strength of short-form video is evident in YouTube’s dominant position as the most viewed in each market surveyed outside of China. Looking at the top five, three of them are social video platforms which highlights its importance in the viewing mix for consumers.”