Short-form streaming originals to boom | VOD | News | Rapid TV News
By continuing to use this site you consent to the use of cookies on your device as described in our privacy policy unless you have disabled them. You can change your cookie settings at any time but parts of our site will not function correctly without them. [Close]

The likes of Snapchat, Facebook Watch and Quibi are driving a boom in short-form content and already make up 9% of all video-on-demand (VOD) series globally according to research from Ampere Analysis. 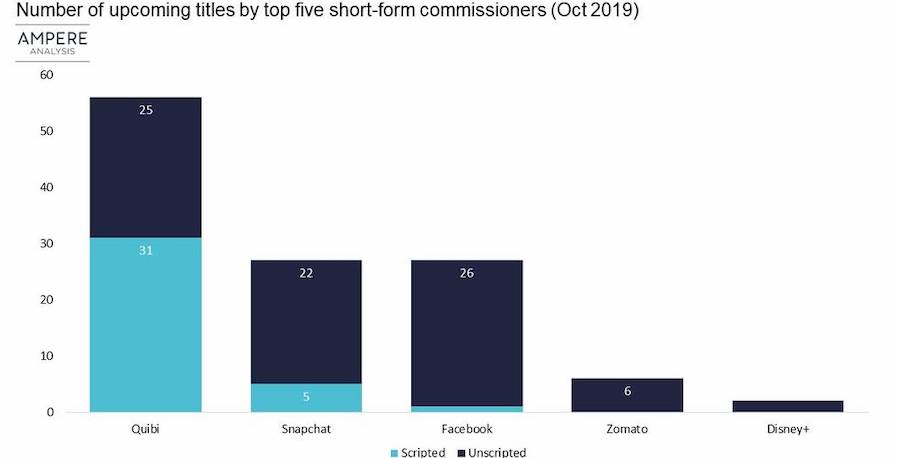 The study is the latest by the company looking at the likes of mobile-first products and calculates that 11% of upcoming VOD commissions are short-form. Initially driven by comedy, upcoming short-form series are shifting towards factual content, with a focus on reality, entertainment and documentary.

Ampere notes that this contrasts with long-form subscription video-on-demand content, where most commissions are high-end, scripted titles. It adds that although commissioning is currently led by the social media platforms, mainstream broadcasters are starting to board the bandwagon, with Channel 4 and BBC in the UK getting in on the act.

“Short-form content is growing strongly, and we expect to see it boom – both in English speaking markets and Asia where it’s well-established,” commented Ampere Analysis analyst Olivia Deane. “Attractive to large and small players alike, short-form offers the opportunity to experiment with high production values at a smaller scale.”

The study also showed that Facebook currently has the most short-form originals with a focus on news and current affairs, including daily broadcast news programme, Fox News Update. Short-form was also seen to be popular in Asia, and Hong Kong’s Viu came in second globally for the volume of short-form originals currently on their platform, most of which were reality or entertainment. SVOD leader Netflix has opted for another approach, preferring scripted comedies such as dramedy Special, sketch comedy series I Think You Should Leave, and coming of age comedy Bonding.

In terms of the number of short-form commissions, small and emerging SVOD and advertising supported video-on-demand (AVOD) platforms were seen to have performed well, with newcomer Quibi dominating the number of releases in 2020. Indeed only producing short-form content, Quibi is already the largest commissioner of bite-size television and with Snapchat made the top 10 streaming commissioners between August and September 2019.

The study noted that a high proportion of short-form video originates from Asia Pacific territories as a result of regional focus on hand-drawn and computer-animated anime content. Almost one third (31%) of all existing short-form originals come from South Korea, Japan, Hong Kong or China. It skews towards scripted material: 44% of all short-form originals here are scripted, and 43% of those titles are anime.

Another key source driving short-form was the broadcast sector and in the UK Channel 4 has already said it plans to spend £1 million on new short-form content. It has doubled its investment in Comedy Blaps series, and commissioned over 120 comedy shorts of Sparks, which is intended for a young audience reached through social media. The BBC is also investing in short-form Comedy, with social media-themed Sorry and Lazy Susan. Four of these will be distributed direct via iPlayer.

Summing up the survey findings, Deane added: “Quibi, along with other smaller niche platforms, has an exciting opportunity to chase the existing audiences of streaming giants like Netflix and Amazon. This is a market the mainstream broadcasters don’t want to miss out on, and both Channel 4 and the BBC are making forays into the world of short-form shows.”
Tweet