Sony, Verizon demo 5G in live sports production | Mobile | News | Rapid TV News
By continuing to use this site you consent to the use of cookies on your device as described in our privacy policy unless you have disabled them. You can change your cookie settings at any time but parts of our site will not function correctly without them. [Close] 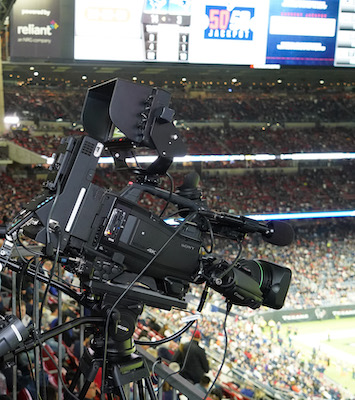 During the Houston Texans vs New England Patriots football game at the NRG Stadium on 1 December, a camera operator from NBC Sports captured video of the game on the field using Sony’s PXW-Z450shoulder camcorder. The video was streamed through Sony’s prototype transmitter box and Xperia 5G mmWave device, via Verizon’s 5G Ultra Wideband network, to a production room in the stadium.

The partners say that the test proved that 5G-connected cameras can be a reliable and beneficial option for future live sports broadcasts. They add that the test showed the potential for remote production teams to be located anywhere, regardless of where the game’s taking place. Furthermore, they say that 5G’s essentially instant wireless connectivity means that cameras can be untethered, allowing for more creative camera positions and angles throughout the game and reducing set-up time and costs required for camera system integration.

“It was exciting to see Sony’s 5G product coming to life,” remarked David Mazza, CTO, NBC Sports Group. “The picture quality is excellent, and we look forward to the day when we can deploy a wireless camera this easily as part of the 5G rollouts around the country.”

“Verizon’s 5G network is built to transform industries and we’re thrilled to demonstrate how it can change the way live sports broadcasts are captured and delivered,” added Nicki Palmer, chief product development officer at Verizon. “5G’s high bandwidth and low latency can enable high definition video to be streamed essentially in real time and captured with no wires on the field.”