British suppliers take European lead on VOD content | VOD | News | Rapid TV News
By continuing to use this site you consent to the use of cookies on your device as described in our privacy policy unless you have disabled them. You can change your cookie settings at any time but parts of our site will not function correctly without them. [Close]

Research from the European Audiovisual Observatory on the amount of film and TV content in VOD catalogues has found that essentially the video-on-demand arena is non-national and with UK content taking the lead. 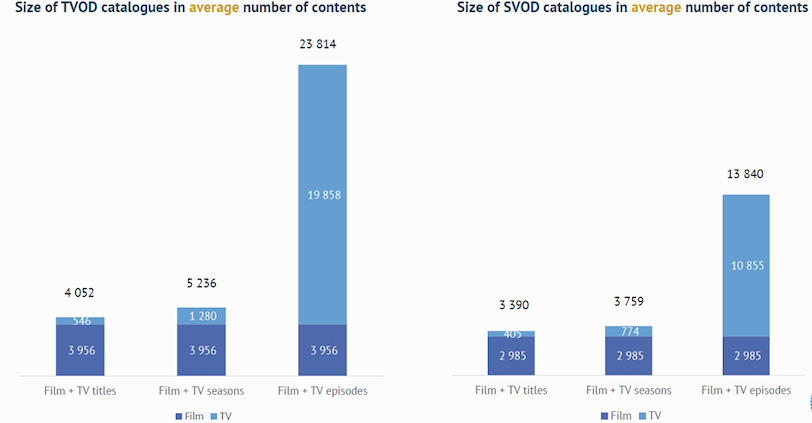 The European Audiovisual Observatory found that European film and TV content represents 30% of all content found on TVOD and 26% of SVOD in the EU if considering film and series titles and/or seasons as opposed to individual episodes. Counting individual episodes, European film and TV content accounts for 27% of all content found in TVOD catalogues and 20% of all episodes found in SVOD catalogues in the EU.

The European Audiovisual Observatory study European Audiovisual Observatory study found that there are more single film titles available on VOD bouquets that there are with TV content, but counts TV episodes, there was more TV content available. The study showed that there was on average five times more TV episodes than film titles offer on transactional VOD offers. That is 3.6 times more on SVOD.

European content accounts for 30% of all content available on TVOD and 26% of all content of SVOD, counting single films and TV titles or seasons. When counting the number of TV episodes rather than single titles or seasons, the share of European content falls to 27% on TVOD and to 20% on SVOD. The share of US content on VOD in the EU is highest when TV episodes are considered, lowest when TV titles are considered.

Most European content in VOD catalogues was found to be non-national with TVOD has a higher share of national film and TV content than SVOD services. On TVOD, British film and TV titles are the most exported titles of EU produced content, getting 32% and 48% of the EU market respectively, followed by French film titles and German TV titles. As regards SVOD, British film and TV titles account also for the lion’s share of EU exports with over 50% of all titles which were exported.
Tweet