Dedicated social video content commissions soar | Social TV | News | Rapid TV News
By continuing to use this site you consent to the use of cookies on your device as described in our privacy policy unless you have disabled them. You can change your cookie settings at any time but parts of our site will not function correctly without them. [Close]

Research from Ampere Analysis into the strategies of the digital studios has revealed that the good times are rolling for the creators of ‘made-for-social’ video. 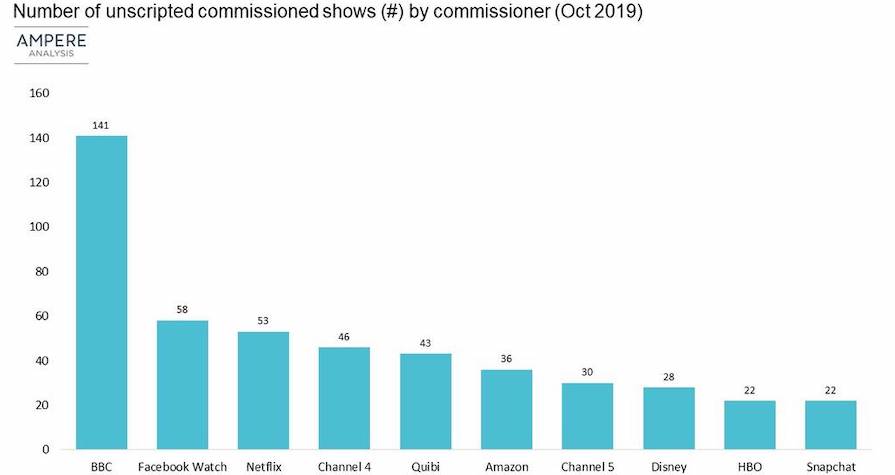 The report is based on analysis of 60 digital studio groups and their channels, Ampere’s tracking of production and commissioning activity, in-depth interviews with digital studios in Europe and North America, and Ampere’s own international quantitative consumer research. The company says that it has found a challenging, fast-paced market, where control of IP and the ability to diversify across platforms and revenue sources are essential to success.

Fundamentally Ampere believes that commissions for content from the social video platforms are an increasingly important revenue stream for digital studio groups. It noted that since mid-2018, the likes of YouTube, Facebook, and Snapchat have commissioned over 200 digital originals. The sector is almost certain to get a huge boost when Quibi joins the made-for-mobile fray in 2020, with over 80 scripted and unscripted titles already in development.

With 58 shows in production at the end of October 2019, Facebook Watch was identified as the second largest commissioner of unscripted content globally after the BBC. Snapchat and Quibi have significantly bolstered the volume of commissions coming from the digital space with the former Snapchat taking joint ninth place, alongside broadcast mainstays HBO and National Geographic, all with 22 commissioned unscripted shows currently in production.

Yet despite the growing number of commissions, Ampere believes that there still aren’t enough to offset the challenging economics of digital-first production. It noted that the timing and the unpredictability of commissioning activity is a major concern for smaller digital studios, impacting cash flow and investment opportunity. As a result, it says that many digital studios have adopted hybrid business strategies to boost their income streams. These include branded video, secondary rights sales influencer marketing, and direct control of ad sales against content distributed by via their own social media channels.

Ampere’s analysis also indicated another challenge for European players in that of the active in-production shows commissioned in the first half of 2019 for Facebook, YouTube, Snapchat, and Quibi, less than 10% were being made in Europe. That said, the research also noted that Facebook’s latest commissions are Western European-focused, with the UK and Germany emerging hubs for the social media group.

The importance of mobile was reflected in the research which showed that daily mobile video usage has increased by 40% since Q3 2017. Ampere also observed that digital studios needed to keep sharp focus on mobile-centric video trends, such as vertical video is key for to succeed in a highly competitive sector, especially given video on Snapchat and Instagram increasingly being used to drive audiences and reach younger consumers. It added that many digital studios already have post-production teams in place to adapt original content into a vertical video format and are looking at new vertical video player TikTok as their next target to capture a younger audience.

“The nature of the fast-evolving digital space requires that digital studios need to ensure long-term sustainable growth over short-term gains,” said Ampere Analysis analyst Henry Beckwith. “Fast-paced technological developments and shifting consumer trends mean that diversification of business models and revenue streams is key to ensuring stability in a volatile marketplace. In particular, digital studios that have greater control over their IP can maximise income and margins, which can then be used to drive growth in other areas of the business.”
Tweet