Ad firms up connected TV investments, premium inventory, 30-second spots | Ad Tech | News | Rapid TV News
By continuing to use this site you consent to the use of cookies on your device as described in our privacy policy unless you have disabled them. You can change your cookie settings at any time but parts of our site will not function correctly without them. [Close]

As the streaming wars heat up, the latest Video Benchmarks Report from Extreme Reach (ER) has shown that connected TV continues to dominate video advertising on the company’s AdBridge platform, accounting for 51% of all video ad impressions in Q3 2019. 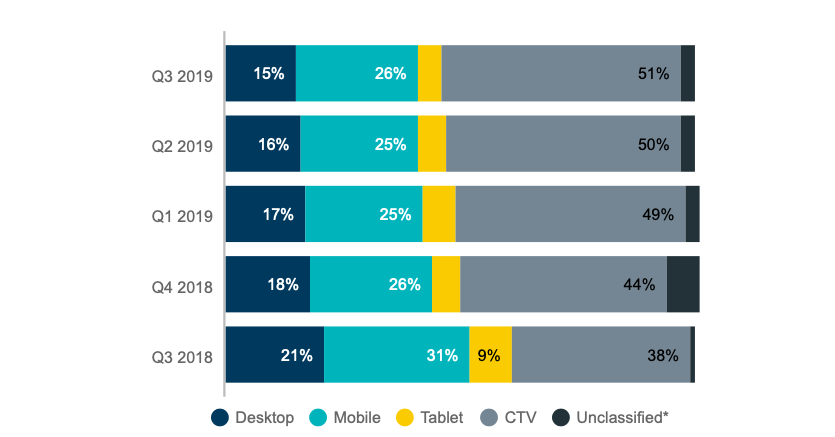 Extreme Reach found that across all video ads served, it found stable metrics quarter over quarter, indicating that the industry was settling into its new, connected TV-based reality.

The data showed that connected TV has maintained a steady growth on ad platforms over the course of 2019, climbing from 49% in Q1 and 50% in Q2. Premium publishers continue to attract the lion’s share of impressions across all advertising categories and that report also indicated the dominance of 30-second ads, signalling said Extreme Reach the proven power of a long-time favourite to tell a richer story that resonates.

In fact, the report revealed that the steady rise of 30-second ads paralleled the surge of connected TV. Q2 2018 marked the first quarter that 30-second ads surpassed 15-second ads in the overall percentage of impressions served by ER. The trend held steady through Q3 2019 when 30-second ads accounted for two-thirds of video ad impressions and 15-second spots declined to 32%. That amounts to an increase of 19.5% for the spot length, from Q3 2018 to Q3 of this year.

With video completion rates over 90%, the vast majority of impressions landed on premium destinations (rather than media aggregator inventory), driving four-fifths of overall impressions in Q3, an increase of 25% over Q3 in 2018. The study also showed that direct-to-consumer brands mirror the broader group of advertisers in strongly favouring premium publishers over the last three quarters.

“It’s interesting to see just how much has changed in the past year, and it’s all been driven by consumers’ embrace of connected TV as a new and better viewing experience,” said Mary Vestewig, Extreme Reach's senior director, video account management. “As we head into 2020, we don’t expect to see major swings in our metrics. But as more AVOD players emerge and the streaming wars heat up, it’s best for brands and their agencies to remain nimble in the ever-changing video advertising ecosystem.”