Nordics ramp up pivot to originals to take on Netflix | Programming | News | Rapid TV News
By continuing to use this site you consent to the use of cookies on your device as described in our privacy policy unless you have disabled them. You can change your cookie settings at any time but parts of our site will not function correctly without them. [Close]

Nordics ramp up pivot to originals to take on Netflix

Despite the global SVOD players regarding the region as providing rich pickings for their wares, local Nordic TV companies have for some time seen local programming as a way to repel rivals and this strategy is being accelerated says a study from Ampere Research. 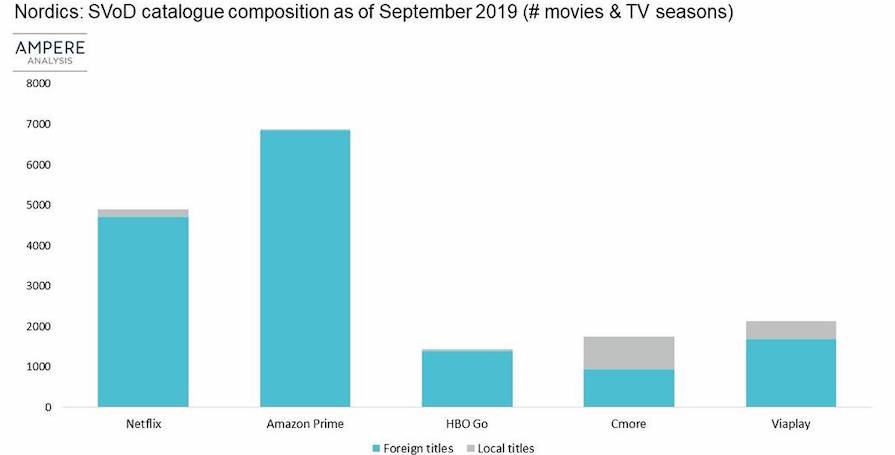 Ampere notes that since its launch in the region in 2012, Netflix has been the driving force in the region’s OTT market, achieving 4.5 million subscribers by the end of 2018. However, despite boasting a large catalogue of international content at low prices and having made select investments in local titles such as SF Studios’ Red Dot, global groups have focused primarily on international content, rather than domestically-produced series.

This, Ampere says, has led local OTT competitors to develop their own locally produced originals as a differentiating factor. And despite the giants’ growing subscriber numbers, Ampere adds that the Achilles heel of the global SVOD players is their typically more limited line-up of local content.

The analyst calculates that in Sweden only 3% of Netflix titles are local, and it’s less than 1% for Amazon Prime. By comparison, almost half (47%) of the content offered by C-More and 13% of Viaplay’s catalogue is locally produced, and the majority of Nordic content currently in production has been commissioned by local players. Out in front is NENT’s Viaplay as the biggest commissioner of new TV shows in the region, followed by public broadcasters SVT, YLE and DR.

The study also reveals that as the Nordic networks focus on commissioning local original content to meet viewer demand, acquisition strategies have evolved. In 2012 (and excluding sports rights expenditure), just under half (49%) of Nordic TV groups’ content spend was dedicated to originals. By 2018 that had risen to 57%. Simultaneously, the investment in acquired TV and film content has dropped, from 51% in 2012 to 43% in 2018 – partly as a result of rising prices as international competitors have moved in, and partly as a result of a strategic refocus.

Ampere cites Swedish public broadcaster SVT as a good example of this shift and is now increasingly turning to single pick-ups of American shows (such as The Assassination of Gianni Versace: American Crime Story) instead of the large volume package deals which used to be standard.

Another part of the armoury is the region’s tradition of co-productions. The global success of locally co-produced shows, such as crime series Bron/The Bridge, encouraged the creation of the ‘Nordic 12’ initiative, via which public broadcasters DR, NRK, SVT, YLE and Iceland’s RÚV co-produce content and retain exclusive domestic 12-month linear and digital rights to 12 shows each year. Nordic public broadcasters have started commissioning online video originals, such as Course in Self-Annihilation (SVT) and Nudes  (NRK).

Ampere’s tracking has indicated a clear demand for broadcaster video-on-demand (BVOD) across the region. Ampere Analysis tracks Sweden, where in Q3 2019, 49% of respondents said they had used SVT Play in the past month, and Denmark, where 31% of respondents had used DRTV platform.

Commenting on the strategies used by the Nordic players, Ampere Analysis Analyst, Léa Cunat said: “Across the globe we’re seeing local TV groups trying to take on the power of the global streaming services by capitalising on whichever gaps in the market exist. In the case of the Nordics, that means ramping up investment in originated content, either individually or as part of partnerships like Nordic 12 to win audiences’ loyalty in both local and international markets.”