Disney+ gains immediate hit with The Mandalorian | VOD | News | Rapid TV News
By continuing to use this site you consent to the use of cookies on your device as described in our privacy policy unless you have disabled them. You can change your cookie settings at any time but parts of our site will not function correctly without them. [Close]

Among the original series and films made available to get Disney+ off to a flying start, the first-ever live-action Star Wars series, The Mandalorian, seemed a sure fire hit and Parrot Analytics demand data has borne this out. 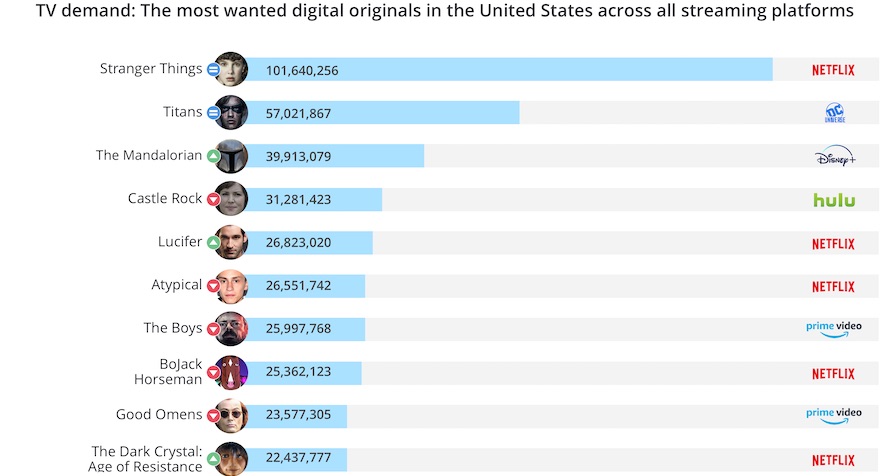 Disney+ kicked off an incredible first-day on 12 November attracting more than ten million customers in the US, Canada, Australia, the Netherlands Puerto Rico, and the Parrot data has shown the flagship Disney+ original series as driving this subs spike. For the week of 10–16 November, the series jumped up to third most in-demand digital original with US audiences.

Moreover, when Parrot tested demand for The Mandalorian on a time-shifted analysis against four of the best performing streaming debuts of the year with US audiences —Netflix's The Umbrella Academy, When They See Us, and The Dark Crystal: Age of Resistance, as well as Amazon Prime Video's Good Omens — the series already was a leader.

The Parrot Analytics time-shift analysis revealed that The Mandalorian was even more popular with US audiences after four days of release than these other top US streaming debuts were at the same points in their runs. The data showed that four days out from their respective launch dates, US demand for The Mandalorian was 58.7% ahead of Good Omens; 35.8% ahead of The Umbrella Academy; 15% ahead of When They See Us; 11.5% ahead of The Dark Crystal: Age of Resistance.

Going forward, Parrot said that given Disney+'s episodic release strategy, it expected demand for The Mandalorian to continue to grow further as new episodes became available to stream over the next several weeks.
Tweet