US advertisers will allocate nearly $7BN to connected TV in 2019 | Media Analysis | Business | News | Rapid TV News
By continuing to use this site you consent to the use of cookies on your device as described in our privacy policy unless you have disabled them. You can change your cookie settings at any time but parts of our site will not function correctly without them. [Close]

US advertisers will allocate nearly $7BN to connected TV in 2019 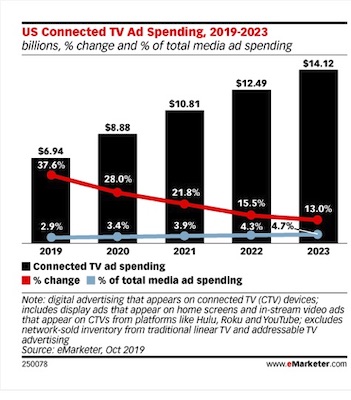 The study says that interest in connected TV is high as the number of cord-cutters and cord-nevers climbs each year and fewer people watch traditional linear TV.

The YouTube, Hulu and Roku are leaders in the connected TV advertising space, and eMarketer expects revenues for YouTube placements that appear on connected TVs to account for about 40% of connected TV ad spending. The analysis note that this list could shake up as at present the largest over-the-top (OTT) and SVOD players, in particular Netflix, are ad-free but this could change everything if for example the latter goes ad-supported as some have predicted.

Concluding, eMarketer cautioned that while connected TV also offers the promise of better audience targeting and measurement, there are some issues to address such as a fragmented infrastructure and a high potential for fraud.