Rugby World Cup drives mobile viewing spike on EE network | Ratings/Measurement | News | Rapid TV News
By continuing to use this site you consent to the use of cookies on your device as described in our privacy policy unless you have disabled them. You can change your cookie settings at any time but parts of our site will not function correctly without them. [Close]

If there has been one happy party after England’s 2019 Rugby World Cup final defeat it has surely been the nation’s mobile operators for whom the tournament as a whole has delivered huge audiences. 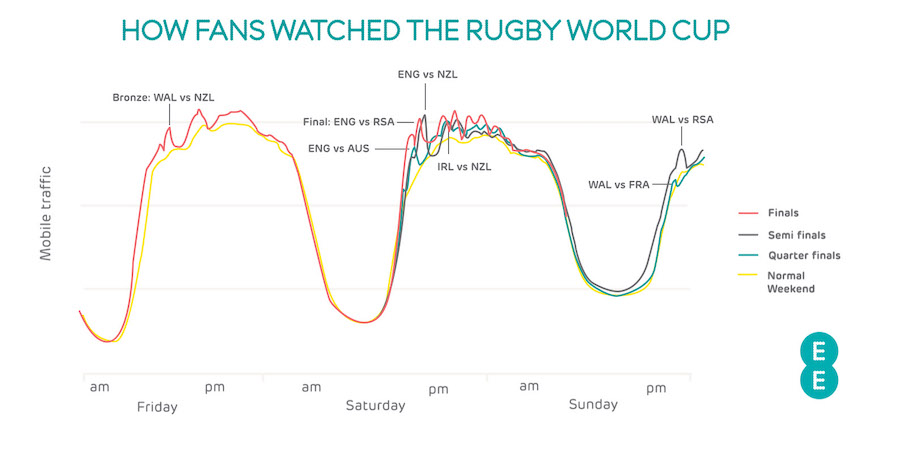 Data released by UK operator EE’s into how fans used their mobiles to follow the home nations during the tournament has revealed that the early morning schedules, with games kicking off at 08:15, 09:00 and 11:00 UK time for the quarter-finals, semi-finals and finals, drove spikes in mobile data on the EE network, as fans opted to watch on phones and tablets.

England’s early morning weekend win over New Zealand in the semi-final drove the largest relative spike in mobile traffic of the knockout rounds, up more than 20% on normal traffic levels. And as England raced into an unexpected lead, EE said that it saw a big increase in traffic as fans tuned in for the second half.
Wales’ highest data spike came in the Friday morning bronze final match against New Zealand, on 1 November. EE attributed this largely to the game being played on a Friday morning with the 09:00 start seeing fans tune in on their way to work and at their desks.

As England took to the pitch in the final against South Africa on 2 November, a Saturday, the data showed that more fans had dragged themselves out of bed or made sure all eyes were on a big screen. Data usage was down significantly compared with both England’s quarter- and semi-final. Many of those who were watching on mobile, switched off at half time to see what social media was saying. Facebook and Instagram topped the charts for traffic uplift, before viewers headed back to ITV Player and Sky Go for the final forty minutes of the tournament.

Somewhat unexpectedly, neither the final nor the semi-final drove the biggest spike on EE’s mobile network. The 11:45 Thursday kick off of England’s group game versus the US saw the most fans take to the small screen. EE believed that this was likely due to fans around the country tuning in from desks.

Commenting on the usage stats, Marc Allera, CEO of the consumer division of EE parent BT said: “The early morning kick-offs have meant that mobile viewing has been a huge part of this year’s Rugby World Cup, with fans turning to their smartphones and tablets to make sure they’re not missing out on the action. We invest in the EE network so our customers can stay connected to the things that matter most and never miss a moment, wherever they are.”