Broadband market gets added fibre in second quarter | Infrastructure | News | Rapid TV News
By continuing to use this site you consent to the use of cookies on your device as described in our privacy policy unless you have disabled them. You can change your cookie settings at any time but parts of our site will not function correctly without them. [Close]

In what can be seen quite clearly as a boost to the potential of IPTV services, between Q2 2018 and Q2 2019 the number of broadband copper lines fell by 6.6% , while at the same time fibre-to-the-home (FTTH) connections increased by 18.6% and FTTx/VDSL by 7.1% says research from Point Topic. 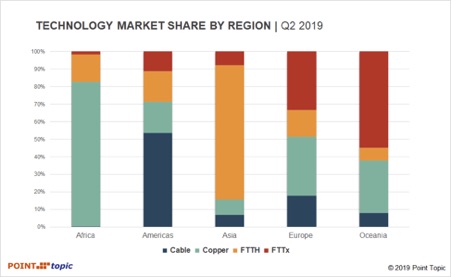 The research found that fundamentally at the end of Q2 2019, the quarterly growth of fixed broadband subscribers stood at 1.7% with the number of global fixed broadband connections totally 1.08 billion.

The analyst found that in the second quarter of the year, Wireless, mostly FWA, and satellite saw a healthy growth of 26% and 9.1% respectively while cable connections grew by a modest 2%. China continued to be the largest fibre growth market, with two-thirds (11 million) of global FTTH net adds. Belgium, Thailand, Argentina, Philippines, Chile and South Africa among others saw significant FTTH quarterly growth rates in double digits.

In terms of annual changes, the survey showed that between Q2 2018 and Q2 2019 the number of copper lines globally fell by 6.6 per cent, while FTTH connections increased by 18.6% and FTTx by 7.1%. Subscribers continued to drop copper in favour of fibre, albeit at a slower rate than in the previous quarter. Wireless and satellite saw a healthy growth as these technologies are increasingly used to cover broadband ‘white spots’.

Direct fibre connections were found by Point Topic to have continued to grow at high rates. In Q2 2019, 66% of global FTTH net additions came from China due to the sheer size of the market. Having said that, China saw a mere 3% quarterly growth in FTTH connections, compared with double digit growth in Belgium, Thailand, Argentina, Philippines, Chile and South Africa among others.

More than 63% of all net additions in fixed broadband subscribers came from East Asia which also retained the largest regional market share of all subscribers at 47%.

Drilling down, Point Topic found that global fixed broadband growth was the lowest in the last six quarters, and that the overall trend over the last four quarters was the slowdown in growth. It attributed this in the main to saturation of broadband markets in the leading economies and the increasing take-up of mobile broadband connections over 4G and 5G technologies.

Compared with the first quarter of 2019, quarterly growth for Q2 2019 was higher in Eastern Europe (up 0.29%) and America Other (0.18%). The rest of the world saw a decline in quarterly growth compared to Q1 2019, with Africa seeing the largest difference falling1.93% and Oceania followed with a 1.02% drop. Despite this, Africa was still the fastest growing region (2.47% up quarter-on-quarter). Point Topic says that this can be explained by the very low market saturation, given that this region has the second lowest market share of all fixed broadband subscribers at 1.84% and the lowest fixed broadband penetration at 3.93%.