China responsible for over half of all new drama productions | Programming | News | Rapid TV News
By continuing to use this site you consent to the use of cookies on your device as described in our privacy policy unless you have disabled them. You can change your cookie settings at any time but parts of our site will not function correctly without them. [Close]

China responsible for over half of all new drama productions

Research from Ampere Analysis has revealed that China is responsible for over half of the world’s brand-new drama productions, with its leading broadcasters and OTT services commissioning nearly 300 new series in the last six months alone, as many as all of its international peers combined. 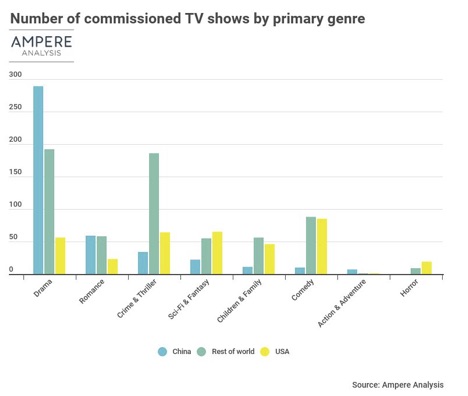 In the six months leading up to September 2019, China had 432 upcoming scripted TV commissions, compared with 359 in the US. Over the same period, a further 645 were commissioned in other markets worldwide. These commissions were heavily skewed towards drama, representing 67% of all upcoming titles and compared with just 16% of upcoming US titles, and 30% in other international markets.

In keeping with APAC regional trends, romance accounts for 14% of all Chinese in-production series compared with just 6% in US and also contrast to such content’s popularity in international markets, crime and thriller only represented a tenth of Chinese scripted commissions. Very few comedy and sci-fi and fantasy commissions were made.

Despite the SVOD services being the most active individual commissioners —and indeed expected to gain quickly on international competitors over the next twelve months —the survey showed that most Chinese content was actually commissioned by a large number of small, local broadcasters.

“However producers looking to target the market should be aware that the underlying preference for drama is driven primarily by the regional broadcast network,” noted Ampere Analysis research director Richard Cooper. “The Chinese SVOD services, which have some of the largest subscriber bases in the world and now represent nearly one in 10 new series green-lit in China, echo the global and US TV giants in terms of the genres they are commissioning.”