Sports rights score over quarter of global content spend in 2018 | Media Analysis | Business | News | Rapid TV News
By continuing to use this site you consent to the use of cookies on your device as described in our privacy policy unless you have disabled them. You can change your cookie settings at any time but parts of our site will not function correctly without them. [Close]

Sports rights score over quarter of global content spend in 2018

Despite pressures on the broadcasting sector, and recent stark comments from leading providers as to its future, research from Ampere Analysis has found sports rights expenditure has nearly doubled over the last six years. 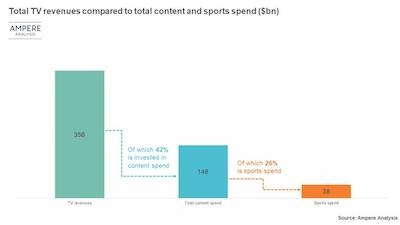 The study found that over a quarter of all content spend worldwide is devoted to sports rights, specifically in 2018, 26% of global content spend was focused on sports rights acquisition at a value of nearly $38 billion. This figure has almost doubled from that recorded in 2012. Putting the value into context, Ampere noted that the new figure means that one in every 10 dollars generated by TV companies around the world ends up with sports rights bodies.

Moreover, and despite the size of the sports rights market, and ongoing pressures from online video platforms, Ampere Analysis said that it had identified room for growth in the sector not just from emerging markets, but also within established and developed territories like the EU big five and the US. In 2018, broadcasters and pay-TV operators in the EU big five markets (UK, France, Germany, Italy, Spain) devoted an average of 33% of content spending to sport, while in the US, the figure was 26%.

Looking at Europe, Ampere found that over the last six years, the sports rights market in the EU big five markets has doubled, reaching €10 billion in 2018. In pay-TV, operators Sky and Telefónica were the biggest drivers of investment in sports rights, accounting for over 60% of expenditure. New OTT players, although gaining ground, are still minority players in terms over their overall spend. By contrast, public broadcasters invest an average of 10% of their content budgets on sports rights, while commercial broadcasters such as ITV, RTL and TF1 invest 25%.

Despite having a smaller population and fewer households than Western Europe, the TV industry in the US is much larger in terms of revenues, and this is reflected in sports spend. US groups spend $19 billion per year on sports rights and Ampere anticipates this will increase as the major competitions enter new rights cycles. In major European markets, even though the main domestic competitions account for over half of sports rights spend, secondary events and competitions have also benefited from the recent increase in rights expenditure maintaining the same pace of growth as the major leagues.

“Even as major leagues turn their attention to international markets outside Western Europe and the US, our analysis shows that there is still opportunity left for many of the major competitions in their domestic markets,” remarked Ampere Analysis senior analyst Alexios Dimitropoulos. “Although there are significant competitive pressures on TV revenues due to the rise of new online competitors, the impending direct-to-consumer fragmentation of the market may also open up opportunities for sports rights bodies – who will increasingly hold some of the few premium rights that money can still buy.”