Apple TV+, Disney+ adoption to be hindered by limited reach | Media Analysis | Business | News | Rapid TV News
By continuing to use this site you consent to the use of cookies on your device as described in our privacy policy unless you have disabled them. You can change your cookie settings at any time but parts of our site will not function correctly without them. [Close]

Apple TV+, Disney+ adoption to be hindered by limited reach

The industry has already placed huge expectation on the November launches of Apple TV+ and Disney+ but research from IHS Markit | Technology is warning that such direct-to-consumer services will likely to encounter limited subscriber growth compared with competitive offerings. 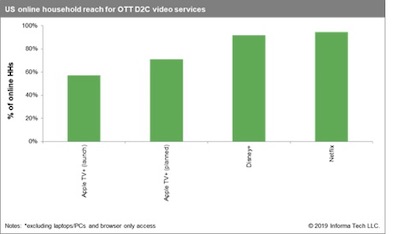 Indeed the research, Consumer Research - Devices, Media & Usage Intelligence Service – Premium, notes that fundamentally Disney and Warner are not new to the DTC market, their service rollouts underscore the rising importance of online platforms to those companies that traditionally dealt with pay-TV operators for mass audiences. The Apple TV+ service will be initially launched on iOS devices, Samsung smart TVs and via web browsers giving Apple TV+ a potential addressable base of more than 70 million households in the US, totalling 57% of homes in the country. This tally accounts for households that will access the service iPhones, iPads, MacBooks, Apple TVs and Samsung smart TVs.

However this means that Apple’s app will initially address only about half of the total US market and, just like Disney, will front up to rivals that have a wider reach. IHS Markit says that for Apple, this could come as a major disadvantage, as various services vie for screen time on the massive number of devices now capable of media streaming. It calculates that a total of 11.5 billion video-streaming-ready products are expected to be connected to the internet worldwide in 2023, up from 8.9 billion in 2018.

By contrast, Netflix already reaches 95% of US households and the analyst expects Disney+ to address 92%. These services are available on a much broader set of platforms. However, IHS Markit stressed that the growth of Disney+ will be driven by its availability on Android mobile devices and that by excluding this, the addressable market for Disney+ shrinks due to a lack of smart-TV partnerships.

“The introduction of so many major OTT services is highlighting the changing landscape of the TV and online video market,” said Fateha Begum, principal research analyst at IHS Markit | Technology. “Traditional content owners like Disney and Warner now are making big moves into providing DTC services. Meanwhile, Apple launching original programming for the first time, competing with the global OTT providers, Netflix and Amazon. With its limited device distribution, Apple TV+ will be accessible to just over half the online population in the US, thus hindering subscriber growth. Although Apple is the largest smartphone brand in the US market and plans to offer free access with hardware purchases, the company would need to widen its device distribution to compete with OTT players that are now available nearly universally.”

Going forward, IHS Markit said that in order to be on the main TV screen in the household, Apple must make Apple TV+ available on third-party devices, including competitors’ digital media adapters. Launches on Roku and Fire TV devices, along with Sony, LG and Vizio smart TVs, are expected after launch, although dates are yet to be announced.

“By opening up to other platforms, Apple TV+ will see its addressable base increase by 24% to 87 million US households,” Begun concluded regarding Consumer Research - Devices, Media & Usage Intelligence Service – Premium . “This will improve Apple’s position, but the company will still be at a disadvantage compared to competitors who can address the entire US market of 124 million online households.