EUTELSAT 5 West B successfully takes off | Satellite | News | Rapid TV News
By continuing to use this site you consent to the use of cookies on your device as described in our privacy policy unless you have disabled them. You can change your cookie settings at any time but parts of our site will not function correctly without them. [Close]

EUTELSAT 5 West B successfully takes off

Leading satellite operator Eutelsat has confirmed that its EUTELSAT 5 West B craft has taken the first steps in the journey to its intended video neighbourhood. 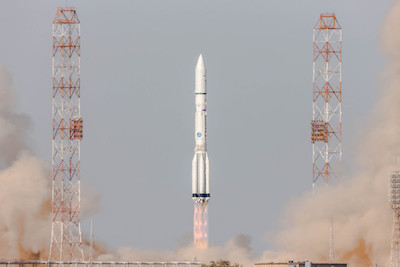 EUTELSAT 5 West B will be positioned at 5° West at the end of 2019 to replace EUTELSAT 5 West A, assuring service continuity for over 300 TV channels broadcast from this position.

EUTELSAT 5 West A will remain operational in orbit at 5° West and carry out other EUTELSAT 5 West B. missions. It will also host the GEO-3 payload of the European Geostationary Navigation Overlay System (EGNOS) under a 15-year agreement signed in 2017 with the European GNSS Agency (GSA), and valued at €102 million.

The craft was launched into super-synchronous transfer orbit by International Launch Services using a Proton Breeze M rocket that lifted off from the Baikonur Cosmodrome at 03.17 on 9 October. Separation of the satellite occurred after a 15 hour 36 minute flight and the spacecraft systems checkout was successfully completed during the following 4 hours. The final orbital position will be achieved following further manoeuvres and in-orbit tests.

“Our congratulations to ILS and Khrunichev for a flawless launch that sees a new Eutelsat satellite propelled on its way to geostationary orbit,” said Eutelsat CEO Rodolphe Belmer. “This satellite programme reflects outstanding collaboration between Eutelsat, GSA, Airbus Defence and Space, Northrop Grumman, International Launch Services and Khrunichev. We look forward to putting EUTELSAT 5 West B to work.”
Tweet