Pay-TV channels remain top buyers of US scripted drama | Media Analysis | Business | News | Rapid TV News
By continuing to use this site you consent to the use of cookies on your device as described in our privacy policy unless you have disabled them. You can change your cookie settings at any time but parts of our site will not function correctly without them. [Close]

Even though the last few years has witnessed the global subscription video-on-demand giants flexing their considerable purchasing muscle, increasingly in first windows, it is the pay-TV industry still licensing the most US premium dramas in major revenue generating markets. 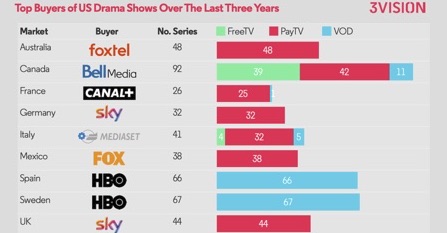 This is the standout finding of the latest 3Vision Show Tracker which monitored the distribution of all US scripted shows in the top 12 global markets, capturing 22 parameters for each programme, including platform, window and catch-up utilisation.

The study found that only in Spain and Sweden did SVOD platforms emerge as the leading US drama buyers with standalone subscription services HBO España and HBO Nordic making over 60 first window acquisitions each over the past three years.

In Australia, pay-TV leader Foxtel bought first window rights to 48 US shows that have premiered in the market over the past three seasons. In terms of volumes they are closely followed by Bell Media in Canada and Sky in the UK.

3Vision added that in some instances the number of shows can be explained by output deals, an agreement whereby the complete catalogue will be bought - Sky has an output deal with HBO, while Bell Media has a similar deal with ShowTime.

Yet the survey did also note that the SVOD players were gearing up for an advance on the market. It pointed out that in Australia, Nine Entertainment’s SVOD service Stan has acquired 37 series compared with Foxtel’s 48.

Commenting on the research, 3Vision EVP Jack Davison said: “We are looking forward to seeing the numbers this time next year – to understand the impact of the launch of the studios’ direct-to-consumer initiatives, but also the push into originals by pay-TV services like Sky. While this will likely see some high profile US shows withdrawn from sale to preserve exclusivity on DTC services, we expect there still to be plenty of possibilities for other services to find and acquire content, with new window continuums, co-exclusivity and straightforward deals likely to still be possible for many.”