Connected TV accounts for half of video ad impressions | Ad Tech | News | Rapid TV News
By continuing to use this site you consent to the use of cookies on your device as described in our privacy policy unless you have disabled them. You can change your cookie settings at any time but parts of our site will not function correctly without them. [Close]

Connected TV accounts for half of video ad impressions

The latest Video Benchmarks report from Extreme Reach (ER) has found that connected TV (CTV) has now established itself as an essential brand building tool which makes up 50% of all video ad impressions, twice that of mobile. 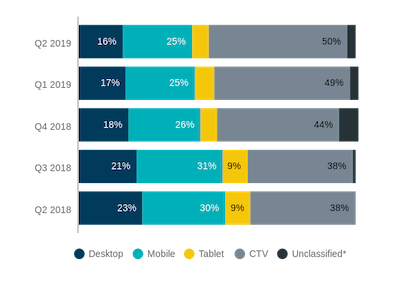 ER’s quarterly Video Benchmarks reports are based on data from the company’s AdBridge platform, and specifically its video ad server.

Trends revealed in the current report for the second quarter of 2019 marked the fifth consecutive quarter that CTV has outranked mobile in the number of impressions served by device. CTV has ascended to a key player in terms of impressions served by device, reaching 50% in Q2, up 31% from the previous year. As more viewers incorporate over-the-top devices and streaming services into their media consumption habits, advertisers are following suit, attracted not just by the number of consumers viewing content on CTV, but by the performance of the ads.

With an average completion rate of 95%, the ability to engage audiences for longer durations and the platform’s reliance on premium inventory that significantly lowers exposure to ad fraud, ER believes that it is no wonder that ad dollars allocated to CTV are on the rise.

In Q2 2019, premium publishers accounted for 83% of overall impressions compared with 17% for media aggregators. This speaks both to CTV’s ascending position in the digital landscape and, notably, the trust most advertisers place in premium.

ER’s data showed that 30-second ads continued to dominate in Q2 despite a 7% drop from Q1 that put the category at 64%. In the same Q1 to Q2 period, 15-second ads saw a significant 20% rise in impressions. The year-over-year figures were notably different, however, with 15-second ads decreasing by 24% and 30-second spots increasing by 19%, while 6-second ads saw a slight decline (7%) YoY and a nearly 60% rise for Q2. ER believed that the takeaway was that there is no “ideal” ad length and that quarter-by-quarter and year-over-year variations reflect advertisers’ deepening understanding that ad lengths need to be determined by purpose, vertical, audience, format and device rather than what it calls 'the trend du jour'.

“The growing prominence of non-linear TV options is giving advertisers a wealth of new opportunities for engaging with consumers in meaningful ways, especially when you consider the new targeting technologies that enable unprecedented levels of personalisation,” noted James Shears, VP of advanced advertising for Extreme Reach commenting on the Q2 Video Benchmarks report  “It’s important for marketers to broaden their focus and take advantage of the fragmentation while finding those devices that work best for their brands.”