Almost half of US households subscribing to at least two OTT services | OTT | News | Rapid TV News
By continuing to use this site you consent to the use of cookies on your device as described in our privacy policy unless you have disabled them. You can change your cookie settings at any time but parts of our site will not function correctly without them. [Close]

Research from Parks Associates has revealed that the percentage of US broadband households with multiple OTT subscriptions has increased by 130% since 2014, with in 2019 46% of homes subscribing to two or more OTT services. 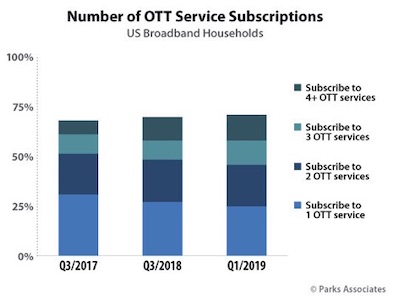 According to the Partnering, Aggregation, and Bundling in Video Services report, only a third of such homes subscribed to multiple services in early 2017 and 20% in 2014.

Parks believes that several trends in the video services industry are shaping partnerships, including intense competition, the move of content providers to launch direct-to-consumer offerings, the lack of differentiation among OTT services, and the existing infrastructure and consumer relationships among larger players.

It noted that while overall adoption and awareness of OTT video services as a category was high, awareness of any specific individual service is low, which will make it difficult for smaller services to match the scale, revenues, and marketing efforts of larger players. Parks Associates research shows nearly three in ten OTT services in the US are on Amazon's Prime Video Channels aggregation platform, more than four times the rate from two years ago.

“Most OTT households are anchored by one of the three major OTT services—Netflix, Hulu or Amazon Prime Video—but consumers are finding they can't fulfil all their interests through a single service," said Steve Nason, senior analyst, Parks Associates, commenting on the Partnering, Aggregation, and Bundling in Video Services report.

“Many small and medium-sized services are building their brand and subscriber base by filling in these gaps in content. Netflix can afford to license high-value content like Seinfeld to supplement its original content, and Apple can buy commercial space during the Emmys and NFL games to promote its upcoming Apple TV+ service and its array of content and stars. By contrast, smaller OTT services are having to harness the power of a partnership with an aggregator, bundling or content partner, or marketing and promotion partner to boost awareness of their brand and offerings.”
Tweet