Streaming eclipses traditional TV among adult online video viewers | Media Analysis | Business | News | Rapid TV News
By continuing to use this site you consent to the use of cookies on your device as described in our privacy policy unless you have disabled them. You can change your cookie settings at any time but parts of our site will not function correctly without them. [Close]

A new study from Horowitz Research has found that after exponential growth in adoption of streaming between 2010 to 2016, the share of adult TV viewers who stream at least some of their TV content has plateaued for the past three years at around 65%. 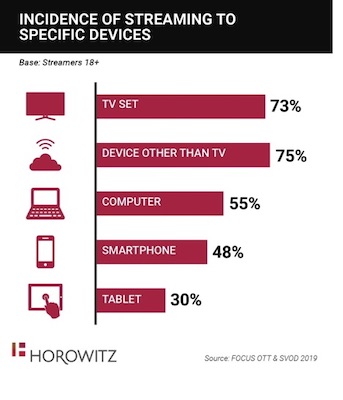 The study showed that the explosion of connected TV and smart TV uptake was playing an instrumental role in a growing reliance on streaming. The TV set was the screen most often used to stream to, with 73% of streamers reporting that they stream to a TV set weekly, mainly by using a connected TV device like an Amazon Firestick or Roku, or through a smart TV app. Just under a quarter of streamers (24%) reported doing all of their streaming on the TV set.

Streamers were revealed to be using on average 2.4 SVOD services, with Netflix remaining the most popular. The report also identifies a growing number of TV viewers experimenting with virtual MVPDs such as Sling TV, DirecTV Now, YouTube TV and Hulu with Live TV.

Among the two-thirds of adult Americans who stream, however, there was found to be a growing reliance on streamed content. Horowitz revealed that the share of streamers who stream more than half of their TV content viewing has risen from 57% in 2018 to 66% in 2019. Overall, streamers spend 57% of their viewing time streaming, compared with just 39% on traditional TV (MVPD-delivered live, VOD, DVR, and antenna viewing).

Horowitz observed that the ability to stream to the TV was also playing a role in current cord-cutting trends. People who did not subscribe to an MVPD (a traditional cable or satellite service) were much more likely to stream to the TV set than to any other device. This said the analyst underscores the fact that TV content and the TV experience in general were still important, even while viewers are questioning the value proposition of pay-TV as it has been traditionally packaged, priced, and delivered. Yet people who still pay for cable or satellite TV service were more likely to spread their viewing across a variety of different devices. Such viewers were said to be streaming not as a replacement of traditional TV platforms, but to complement them by expanding their viewing opportunities.

“The streaming environment will become increasingly cumbersome to navigate— and more expensive— with media companies like Disney and NBC launching their own streaming apps and removing their content from Netflix and other platforms,” remarked Horowitz SVP of insights and strategy Adriana Waterston.

“We keep hearing from consumers that they wish there were a service they could subscribe to, to pay one price to access all the content they want and have it organised all in one place, but that they can watch anytime, anywhere, on any screen. In a sense, consumers want an MVPD service, but with the convenience, control, portability, flexibility, and value for the money they get with streaming.”