SVOD players to redraw online video landscape | VOD | News | Rapid TV News
By continuing to use this site you consent to the use of cookies on your device as described in our privacy policy unless you have disabled them. You can change your cookie settings at any time but parts of our site will not function correctly without them. [Close]

A survey from HarrisX has revealed that the imminent new entrants to the subscription video-on-demand (SVOD) arena, with Disney+ at the vanguard, are set to redefine the over-the-top market. 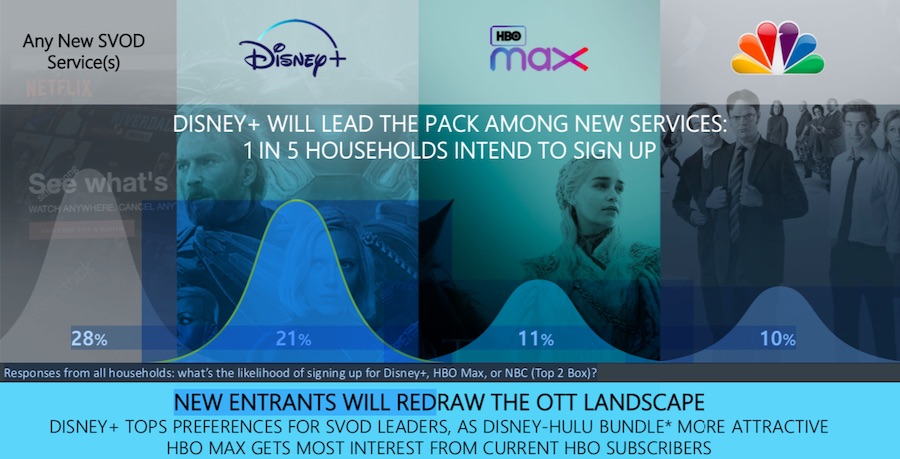 The research shows that just over a quarter (28%) of those currently using a streaming service will likely sign up for one of the upcoming new offers, with 21% saying they will sign up for Disney+, including Hulu and ESPN+ as a part of its bundle, followed by HBO Max (11%) saying and 10% for the recently announced Peacock from NBC.

HarrisX noted that the potential disruption will likely expand the market as existing subscribers intend to add to their current services. It noted that about 30% of existing customers of HBO Now and HBO Go intend to sign up for HBO Max, adding that the up-sell may indicate retention and revenue growth opportunities for other streamers like AT&T TV Now and Hulu.

In what will be comforting news for the suppliers, the analyst expects that it will be content rather than cost driving service adoption.

In this new landscape, content, not cost, will drive adoption of streaming services. When respondents were asked what most excited them about the new services, HarrisX found that 34% were excited about the library of new movies that Disney+ will offer, 23% said the original content at HBO Max, and 21% said the new TV shows at NBC. This was notably higher than the 16-19% of respondents who were most excited about the cost of the service for Disney, HBO Max and NBC respectively.

HarrisX concluded with the forecast that not only would this content drive adoption, but these new services would have broader appeal. It said that the new entrants to the streaming world, like Disney+ and HBO Max would likely attract demographic groups less likely to be similar to the current body of SVOD subscribers, especially within minorities and older millennial households.