4K 4Charity Fun Run at IBC breaks new ground – on two and four legs | 4K/UltraHD | News | Rapid TV News
By continuing to use this site you consent to the use of cookies on your device as described in our privacy policy unless you have disabled them. You can change your cookie settings at any time but parts of our site will not function correctly without them. [Close]

Record amounts of sponsors and runners, a world football legend and even a goat all contributed to a hugely successful 4K 4Charity Fun Run at this year’s IBC in Amsterdam. 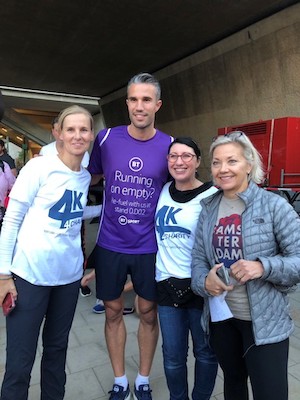 The event attracted overall proceeds of $86,292 which will go to benefit Iridescent, a global education non-profit that empowers underrepresented young people to become innovators and leaders through engineering and technology. Through its two programmes, Curiosity Machine AI Family Challenge and Technovation, Iridescent introduces underserved communities to new technologies and empowers and equips them to apply those technologies to solve the real-world problems they face. $53,042.00 was raised for Technovation.

There was a total of 631 4K 4Charity registrants/supporters representing over 225 companies. Also taking part were Arsenal, Manchester United and Netherlands national team footballer Robin van Persie and a late entrant in the form a goat who escaped from the local zoo just after Rapid TV News ran past the animal whilst still in its pen. Not considering the four legged competitor, first male finisher was Will Pitt of Imagen and IBC’s Elizabeth Cameron was the first female finisher.
Tweet