Facebook introduces Portal TV set-top box | Social TV | News | Rapid TV News
By continuing to use this site you consent to the use of cookies on your device as described in our privacy policy unless you have disabled them. You can change your cookie settings at any time but parts of our site will not function correctly without them. [Close]

Days after enhancing its video software product line, social media giant Facebook has turned its attention to video hardware and has expanded its range of home video devices. 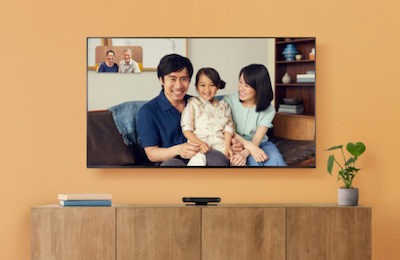 The Facebook Portal line is described as an immersive way to connect and the new line comprises three models: Portal, Portal Mini and Portal TV.

Portal TV sits discreetly on top of or below a television for immersive video. Its lets viewers watch shows like Red Table Talk and other Facebook Watch content together with other people. With the Amazon Prime Video app on Portal TV, viewers can watch shows and films, including Amazon Originals. Viewers can also download other apps like Showtime, CBS All Access, Starz, Pluto TV, Red Bull TV and Neverthink. Other apps will be added.

In addition to the US and Canada, the Portal line-up is coming to the UK, France, Italy, Spain, Australia and New Zealand. Portal is now available to pre-order in the US, Canada and Europe from portal.facebook.com and select retail locations.
Tweet