SVOD soars in 2018 | VOD | News | Rapid TV News
By continuing to use this site you consent to the use of cookies on your device as described in our privacy policy unless you have disabled them. You can change your cookie settings at any time but parts of our site will not function correctly without them. [Close]

A study from Digital TV Research has found that the gross number of global subscription video-on-demand customers increased by 139 million in 2018 to 508 million, up 38% annually, with net subs rising by 83 million in 2018 to reach 357 million, a rise of 31%. 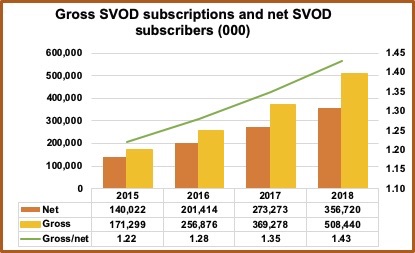 The SVOD Databook calculated that this growth means that the average SVOD subscriber paid for 1.43 SVOD subscriptions by end-2018, up from 1.05 in 2010.

China and the US together accounted for 63% of the global total in 2018 with the Asian powerhouse overtaking the US in 2018 to become the gross SVOD subscription leader. Digital TV Research noted that China added nearly 60 million subscriptions in 2018 alone, with the US up by 27 million, a feat the analyst says was notable given the maturity of the market.

Eight countries in the SVOD Databook had more than 10 million SVOD subscriptions by the end of 2018, collectively providing four-fifths of the global total. India nearly doubled its subscription base.