Disney+ leads in originals among SVOD launches in US | Media Analysis | Business | News | Rapid TV News
By continuing to use this site you consent to the use of cookies on your device as described in our privacy policy unless you have disabled them. You can change your cookie settings at any time but parts of our site will not function correctly without them. [Close]

Disney+ leads in originals among SVOD launches in US

Of the six new SVOD players set to launch in the American market from late 2019 to the first half of 2020 — Disney+, Viacom’s BET+, WarnerMedia’s HBO Max, Apple TV+, short-form start-up Quibi and NBCU’s streaming service — Disney is leading the way in original productions according to a report from Ampere Analysis. 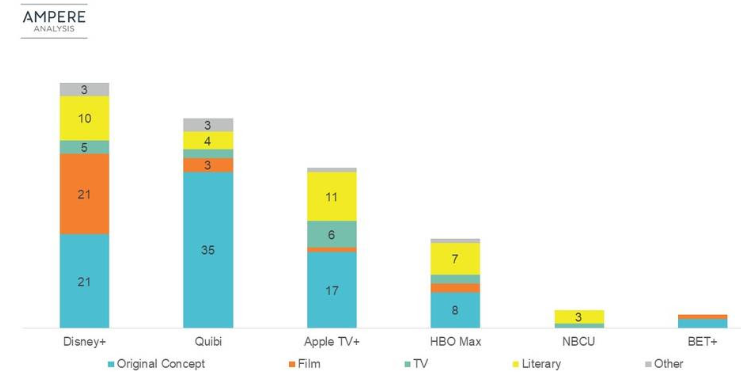 The research shows that the House Of Mouse has 61 upcoming original series and titles, despite its vast back catalogue, and the studio is focussing its streaming offer on TV and films, with TV spin-off The Phineas & Ferb Movie, and a live-action remake of The Lady & the Tramp movie. Over a third of its original content is unscripted.

Quibi meanwhile plays the advantage of short-form content. The mobile-only platform can compete with Disney+ in terms of number of titles, albeit at a much shorter length of approximately 10 minutes per series episode. Quibi is entirely reliant on the success of its original titles as its short-form nature means there’s no back catalogue and no acquisition targets, Ampere pointed out. The start-up has the highest proportion of unscripted content of the six players at 40%, and is targeting it at a youth-skewing audience.

Without a studio library to access, Apple TV+ is focusing on extremely high-budget, big name flagship scripted series, such as The Morning Show featuring Jennifer Aniston. About 87% of commissions to date are scripted.

Buoyed by its existing catalogue, Ampere expects HBO Max to be led by premium scripted content, although it has recently announced its first two unscripted original commissions.

NBCU’s Peacock service has under five originals planned, so Ampere expects the service to be mainly catalogue-focused. It has just commissioned a third season of high school comedy A.P. Bio, previously cancelled at sibling linear network NBC. To date all announced content is scripted.

And finally, just like NBCU, BET+ has less than five originals to its name to date, and so will also rely on its existing catalogue rather than original content. Another similarity with NBCU is that all announced content is scripted.

“Several of the services are setting out to target specific audiences,” said Fred Black, analyst at Ampere Analysis. “Disney+ is focused particularly on family content, with nothing higher than a 13-years age rating, with more mature content left to the bundle-able platforms Hulu and ESPN+. Quibi’s mobile-only short-form strategy is designed to target teenagers and young adults in the 16-40 years age bracket, while BET+ will be hoping to target the same African American audience as the successful linear equivalent. WarnerMedia, having decided to use the HBO brand name, will similarly be aiming to convert some of that linear audience to streaming subscribers.”