More than half of smartphones owners access video services | Media Analysis | Business
By continuing to use this site you consent to the use of cookies on your device as described in our privacy policy unless you have disabled them. You can change your cookie settings at any time but parts of our site will not function correctly without them. [Close]

More than half of smartphones owners access video services

TV and video was always the intended key use case for advanced comms networks and research from IHS Markit has revealed that a tipping point has been reached in the transition of mobile devices from being voice-centric to media-centric platforms. 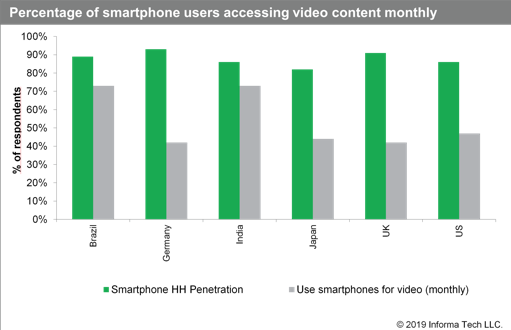 The Out of Home Video Viewing Report 2019 took the views of 2,401 internet users aged 18–64 in the United States, Brazil, the United Kingdom, Germany, Japan and India and found that 53% of owners now using their device to access video services on a monthly basis.

Owners across the different countries report using an average of 3.5 video services per month on their smartphones. Those in urban areas were 60% more likely to stream live content out of the home on mobile devices than rural populations. Data plans and content partnerships have been key in driving out-of-home video viewing in the past few years, particularly with the launch of 4G. Nearly two thirds of consumers who stream content out of the home on a monthly basis select long-form content types as their most watched type of video.

YouTube was the most accessed video service on smartphones across all countries. More than four-fifths of people who use smartphones for video access are using them to watch videos on YouTube on a monthly basis. Yet despite the high usage of smartphones as video consumption devices, only 14 percent of all respondents surveyed selected their phone as their first choice for a device when looking for something to watch.

Video-service usage varied widely among the different countries. Average usage ranged from 42% of smartphone owners in Germany to 73% in India. Indians also view content more frequently than residents of any other country surveyed, with nearly half claiming to do so at least once a day. Viewing rates are similar for live and on-demand content, with Indian respondents most likely to engage in both viewing types. Smartphone owners in India access 5.9 video services monthly, the highest of any country surveyed.

In Brazil, two thirds of Internet users claim to watch video content out of the home on a monthly basis, with similar rates of viewership seen across live and on-demand content. A total of 73% of those watching out-of-home content in Brazil select long-form content types as their most watched out of home, higher than any other market. Films are most watched on mobile devices out of the home with 41% selecting it, while TV shows lead in nearly all other markets.