Asian community leads the way in US streaming | Media Analysis | Business | News | Rapid TV News
By continuing to use this site you consent to the use of cookies on your device as described in our privacy policy unless you have disabled them. You can change your cookie settings at any time but parts of our site will not function correctly without them. [Close]

Asian community leads the way in US streaming

A study from Horowitz Research has revealed that Asian TV content viewers continue to lead the market in US streaming TV with just over three-quarters of the community being streamers, compared with 65% of TV content viewers overall. 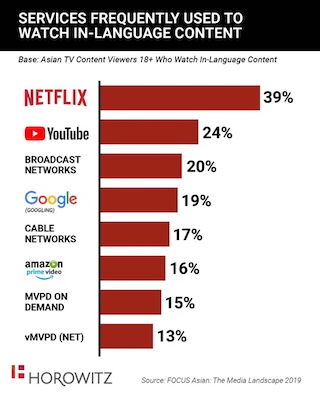 The FOCUS Asian: The Media Landscape 2019 report covered TV and video subscriptions, viewing behaviours and attitudes towards TV content and more among Asian TV content viewers and found that overall, Asian TV content viewers spend on average more than half (52%) of their viewing time with streamed content and just 39% of content is watched live through traditional TV platforms. Moreover, a quarter of Asians stream all of their content.

The analyst believes that the combination of tech-savviness, the demand for international content that was generally unavailable or expensive to subscribe in the US, and the programming and marketing challenges the pay-TV industry faced in serving a culturally and linguistically diverse consumer segment, has created what it calls ‘the perfect storm’ for Asians to become the leading-edge streamers that they are today.

Horowitz noted that online streaming among US Asians streaming content was not a new development, and much of the practice was driven by the demand for culturally resonant content from their countries of origin. The report showed that in-language and international content play an important role in the viewing ecosystem of most Asian TV content viewers, with almost three-fifths of US Asians watching at least some in-language content weekly. Among viewers, 59% said they access Asian-language content via streaming frequently compared with just 31% who access it via traditional cable/satellite/antenna.

Compared with other communities, US Asians were revealed to tend to over-index on being connected, internet access and own smartphones while under-indexing for pay-TV. Indeed, only 71% of Asians reported having a traditional MVPD, substantially lower than the total market at 82%. Notably, among those who do subscribe to pay-TV, 38% of Asians also pay for an in-language or international package, highest among Indians (38%) and Filipinos (36%), and lowest among Chinese (19%).

Looking at who is about to cash in on these trends, Horowitz observed that Netflix has already become a main provider of Asian content, with 39% of in-language viewers saying they access Asian-language content through the service. It added that skinny TV services like Sling TV and DIRECTV NOW are specifically targeting Asian audiences with packages of in-language content.

“The Asian market has always been a challenge for the pay TV industry," commented Adriana Waterston, SVP of insights for Horowitz Research. “We have always known that there is a strong market for in-language and culturally relevant content, but with the Asian population hailing from so many countries and with so many linguistic and cultural nuances, scalability has been a major hurdle. The efficiency and personalisation of streaming solves many of the inherent challenges of serving this audience. Now the question will be which players will rise to the occasion.”