Service providers struggle to keep pace with customer expectations | Media Analysis | Business
By continuing to use this site you consent to the use of cookies on your device as described in our privacy policy unless you have disabled them. You can change your cookie settings at any time but parts of our site will not function correctly without them. [Close] 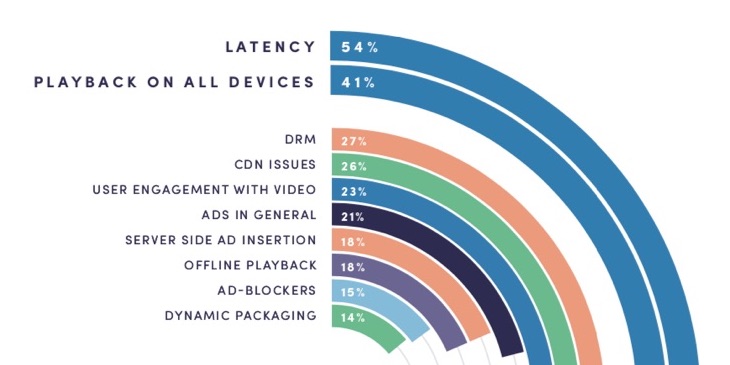 The research is based on the views of 542 professionals working at broadcasters, streaming providers, publishers and social media companies in 108 countries and takes an inside look at the technology adoption plans of companies that are collectively delivering video to mass global audiences.

Fundamentally the research showed that the industry was continuing to face ‘huge’ issues with latency and ensuring playback on all devices. The former was the most significant issue faced by over half (54%) of video developers followed by getting playback on all devices (46%). A year ago these issues recorded responses of 55% and 50% respectively. The latest figure said Bitmovin reflected the fact that the video ecosystem was fragmented, complex and slow to change. For example, achieving low latency requires updates across encoders, content delivery networks (CDNs) and players.

Just over half (53%) of all respondents said they expect to achieve live streaming latency of less than five seconds. Almost a third (30%) had the less achievable goal, in the short-term, of hitting under one second where nearly two-thirds (61.7%) said that they plan to start using low latency live streaming (such as CMAF) before the end of 2020.

Looking at new technology adoption, the survey found that H.264/AVC was still by far the most widely used video codec, used by just over nine-tenths of all survey respondents. Meanwhile, usage of H.265/HEVC inched up a percentage point on an annual basis to 43%. Bitmovin added that in this area, VP9 appears to be stalling, currently being used by 11% of respondents, with only 12% planning to implement it in the next twelve months.

Planned usage of AV1 is set to triple, with 7% of respondents starting to work with it and a fifth expecting to start using it in the coming year. The survey projects AV1 to overtake VP9 as the leading open-source solution and begin to compete with H.265/ HEVC. This said Bitmovin will be fuelled by roll-outs by major device manufacturers, browser vendors and content distributors including Cisco, Mozilla, and YouTube.

The other key finding was that artificial intelligence appeared to be moving from hype to reality. Almost a quarter of respondents expected to start using AI/ML (machine learning) as part of video workflow solutions before the end of 2019, with almost a third planning to do so in 2020. Collectively, this meant 56% of all survey respondents plan to use AI/ML within the next two years. Bitmovin noted that these technologies are expected to help developers deliver high-quality personalised video while enhancing workflows, accelerating time to market and reducing costs.