Jio launches India’s “revolutionary” all-fibre broadband service | Cable | News | Rapid TV News
By continuing to use this site you consent to the use of cookies on your device as described in our privacy policy unless you have disabled them. You can change your cookie settings at any time but parts of our site will not function correctly without them. [Close] 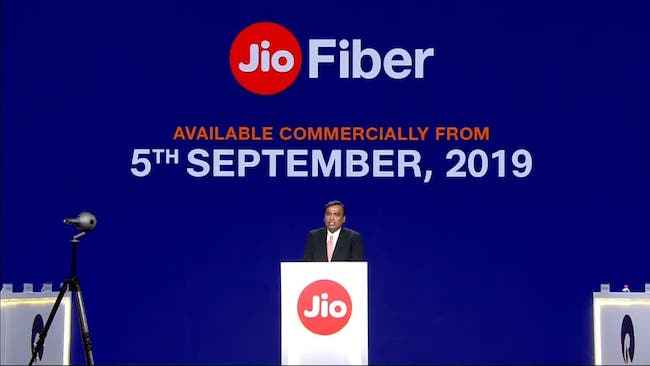 Hoping to re-shape the internet sector in the same manner as it disrupted mobile communications in India, Jio Fiber offers a minimum internet speed of 100Mbps for a monthly charge of INR699. Ultra broadband speeds are offered of up to 1Gbps, for INR8,499 per month.

This compares to the average fixed-line broadband speed in India of 25 Mbps, the company said on Thursday (5 September) as it announced the commercial launch of India’s first all-fibre broadband service.

“The launch of JioFiber, with its revolutionary services, is just the beginning of a new and exciting journey,” said Reliance Jio Infocomm director Akash Ambani.

“As always, we will continue working hard to bring more such amazing services to your home and take Jio Fiber to the next level. I want to specially thank our 5 Lac JioFiber Preview users, who have contributed significantly in perfecting our product and service experience. I welcome them to experience the next level of JioFiber,” added Akash Ambani.

The service will be offered in three, six and 12 month plans, with every JioFiber user receiving a set top box to access the full bouquet of services. Jio said it would also provide attractive EMI schemes trough bank tie-ups so that customers get the benefits of annual plans by paying monthly EMIs.

Incentives such as loud speakers, HD or 4K television sets are being offered to potential customers, depending on which plan they subscribe to.

After the first year, Bharti Airtel said the service will cost subscribers INR999 a year. The STB can also be connected with Airtel's direct-to-home (DTH) service to access live TV channels.
Tweet