Global OTT revenues rise $17 billion through 2018 | OTT | News | Rapid TV News
By continuing to use this site you consent to the use of cookies on your device as described in our privacy policy unless you have disabled them. You can change your cookie settings at any time but parts of our site will not function correctly without them. [Close] 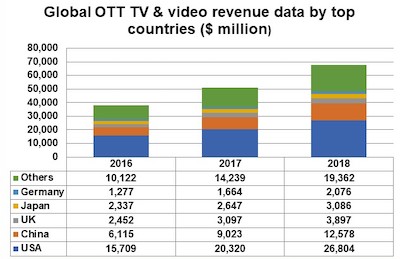 The OTT TV and Video Databook study researched the state of play in 138 markets and of these countries the top five commanded 71% of the global revenues by 2018 with over-the-top (OTT) revenues exceeding $1 billion in 10 countries in 2018.

The US and China were together responsible for more than half the world’s additional revenues in 2018 with the former market generating $6.5 billion in revenues in 2018, with the Asian powerhouse contributing $3.6 billion.

Digital TV Research found that SVOD became the largest OTT revenue source in 2014 when it overtook AVOD. SVOD’s share reached 53% in 2018 with the platform’s revenues climbing by $11 billion in 2018 to $36 billion. This represented a 44% rise over the year. Revenues from the resurgent AVOD sector increased by $5 billion in 2018 to take its total to $22 billion.
Tweet