Singapore, Malaysian viewers check in to Hotel Del Luna | Ratings/Measurement | News | Rapid TV News
By continuing to use this site you consent to the use of cookies on your device as described in our privacy policy unless you have disabled them. You can change your cookie settings at any time but parts of our site will not function correctly without them. [Close]

Data released by tvN has shown that its latest drama Hotel Del Luna has dominated viewership rating charts in Singapore and Malaysia, garnering top three positions for audience aged 4 or above since premiere. 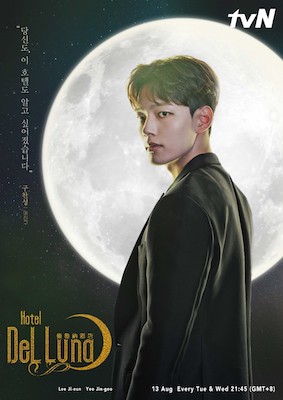 Starring singer IU and actor Yeo Jin-goo Hotel Del Luna is a fantasy romance drama about a mysterious hotel that is open to ghosts only. The owner Man-wol (IU), a cranky but beautiful lady who’s lived for more than 1,000 years, meets a clever but weak-minded elite hotelier, Chan-seong (Yeo Jin-goo), whose destiny is to now face ghosts and run the hotel together.

In Malaysia, according to data supplied by KM Singapore, the series is ranked No. 2 among all 142 Astro pay-TV channels for its episodes 2, 3 and 4 among audience aged 4 or above; the series’ highest rating moment took place in episode 2, with a rating of 2.014%. tvN said that as the storyline intensifies, it expects the rating of upcoming episodes will continue to spike.

In the digital space, rankings from Good Data Corporation released on 27 August showed Hotel Del Luna to have received a buzzworthy score of 33.87%, more than double of the next title.

Hotel Del Luna airs every Tuesday and Wednesday on StarHub and Singtel TV in Singapore, and Astro and unifi TV in Malaysia.