Korean Designated Survivor celebrates tvN ratings success | Ratings/Measurement | News | Rapid TV News
By continuing to use this site you consent to the use of cookies on your device as described in our privacy policy unless you have disabled them. You can change your cookie settings at any time but parts of our site will not function correctly without them. [Close]

The Korean remake of US drama Designated Survivor has achieved record ratings on tvN, and is now streaming on Netflix. 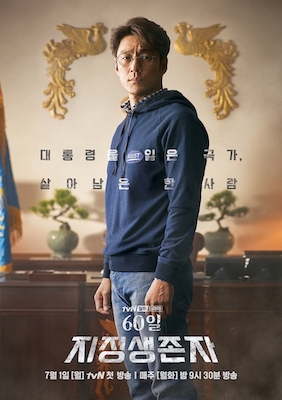 Starring Ji Jin-hee and co-produced by South Korea’s Studio Dragon and eOne, the series Designated Survivor: 60 Days began airing on 1 July, and recorded the highest rating of this year’s tvN dramas which have aired on weekdays.

The last episode recorded an average rating of 6.2% and a peak rating of 7.9%. The average viewing time started at 28 minutes and increased by the end to a maximum of 40 minutes.

“While maintaining the basic structure of the original drama, we revised the characters and episodes according to the affairs of Korea. It will be a new and entertaining story with different charms from the original drama,” said a spokesperson from Studio Dragon.

The premise of the drama sees the main character Park Mu-jihn (Ji Jin-hee) become Acting President of South Korea and given a period of 60 days to find the mastermind behind a terrorist attack and save the country from crisis before the presidential election.

“The positive comments from the fans of the original Designated Survivor have encouraged us greatly in producing this drama. We believe that this remake has set an excellent example of a successful synergy between the original drama and localisation,” said Studio Dragon in a statement.

The studio, known for its productions Guardian: The Lonely And Great God, Mr. Sunshine, And Memories Of The Alhambra, plans to launch a total of 28 new dramas in 2019.