SVOD growth offsets falling pay-TV in Italy as French consumer TV and video spend rises | Media Analysis | Business | News | Rapid TV News
By continuing to use this site you consent to the use of cookies on your device as described in our privacy policy unless you have disabled them. You can change your cookie settings at any time but parts of our site will not function correctly without them. [Close]

Research from Futuresource Consulting in two key European territories is very much a tale of two countries for France and Italy and with the former market showing a return to growth while the latter lags. 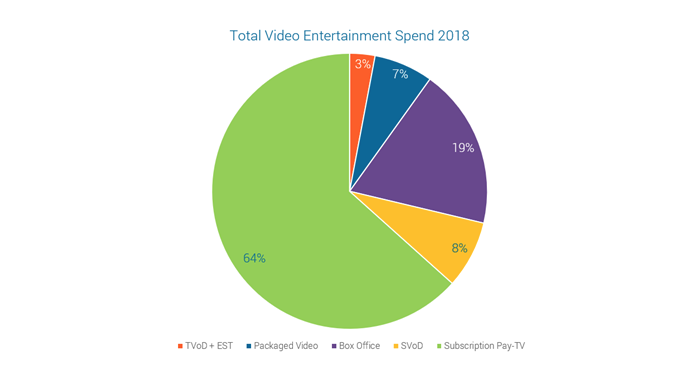 The analyst notes that to date French TV and video entertainment market has been sluggish overall compared with its major European counterparts and attributes the expected upturn in its research to the digital video market gaining momentum, driven predominantly by Netflix driving subscription video-on-demand (SVOD) growth. It calculates that overall, SVOD revenues will hit €827 million by the end of 2019 with total video entertainment consumer spend in France exceeding €7 billion, making the country the third largest video entertainment market in Europe.

Futuresource found that taking multiple SVOD subscriptions is still relatively uncommon in France, with fewer than two-fifths of SVOD households taking more than one service, with no significant challenger to Netflix since CanalPlay exited the market in mid-2018. In other major territories — such as the US where SVOD households are trending towards an average of three per household — multiple SVOD service uptake is on the rise.

“Despite the closure of CanalPlay, SVOD has started to take off in France driven by Netflix’s fantastic performance,” said Tristan Veale, market analyst at Futuresource Consulting. "They have acquired the rights to key local language shows, which have been well received and have created a buzz around the service. From 5 million subscribers at the end of 2018, representing half the market, we are expecting their subscriber base to grow further in 2019. Over two thirds of Netflix users now say viewing on any TV is their most preferred way, with smart TVs in particular a key driver, a trend we are seeing in many other markets we survey.”

By contrast in Italy, the analyst says that even though consumers are expected to spend no more on video entertainment in 2019 compared with what they did in 2018, there is significant turbulence occurring within the underlying market. That said, 2019 is expected to be a stellar year for both SVOD and Box Office, offsetting a lacklustre year for transactional home video and pay-TV markets.

Futuresource observed that SVOD grew 65% to €231 million in 2018, accounting for the majority of home video (DVD, Blu-ray, SVOD, TVOD, EST) spend for the first time. SVOD was seen to be providing most of the impetus in the Italian home video market, with annual consumer spend expected to reach nearly €1 billion by 2023. Growth will be driven by existing services, with Netflix and Amazon Prime taking off, along with the proliferation of new services.

Pay-TV remains a vital segment of the landscape and in 2018 on average accounted for 73% of consumers spend on video entertainment. However, changing consumption habits are placing this under threat and in 2018 subscriptions fell, and as a result retail value declined by 2% to €2.78 billion. In 2019, following the rapid decline of Mediaset, since it lost key sports rights and sold its DTT operation to Sky, total subscriptions are expected to fall a further 7%, although revenue will be marginally less impacted.

“Netflix is a key driver of revenue, although TIMVision had more subscribers thanks to frequent bundling with broadband,” Veale added in the round up of the Italian market. “In 2019, consumers are expected to spend €340 million on SVOD, up by 47%, with 5.3 million households subscribing to one or more services. Following this current trajectory, by the end of 2020 there will be more SVOD households than pay-TV subscribing households, with Italy following the example of Australia where this has already happened.”