Zee Cinema’s Kesari becomes highest-rated premiere on Independence Day | Ratings/Measurement | News | Rapid TV News
By continuing to use this site you consent to the use of cookies on your device as described in our privacy policy unless you have disabled them. You can change your cookie settings at any time but parts of our site will not function correctly without them. [Close] 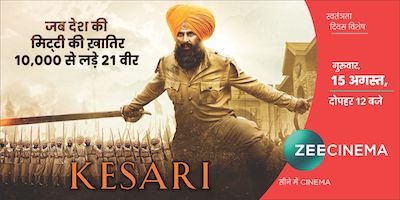 The film captured the historic events of the Battle of Saragarhi and the bravery displayed by 21 Sikh soldiers. The battle was fought on 12 September 1897 in the Tirah region of India’s North-West Frontier Province and saw 21 soldiers of the 36th Sikh Regiment fight against a fleet of 10,000 Afghanis. Led by Havildar Ishar Singh, played by superstar Akshay Kumar, the Indian task force’s battle is commemorated daily to this day.

Directed by Anurag Singh, Kesari also features Parineeti Chopra in a lead role. The war drama is Kumar’s biggest hit, which also went on to become the fourth highest Bollywood grosser of 2019, collecting 154 crores in India alone. To commemorate the screening on India’s Independence Day, ZEE Cinema changed its channel’s logo and brand assets to the colour saffron.

The impressions were measured by BARC for Week 33 for 2+ audiences in HSM Urban + Rural markets and the screening has become one of the top three rated movies of the year. Zee Cinema has been leading rankings over the past five weeks with 489 million impressions.

Over the years, the Zee Cinema channel has premiered some of the biggest titles on Independence Day and has year-on-year rated No.1 with Independence Day premieres of Parmanu: The Story of Pokhran, Dangal, Baaghi and Holiday .