Free trials influence over half of OTT video service subscriptions | OTT | News | Rapid TV News
By continuing to use this site you consent to the use of cookies on your device as described in our privacy policy unless you have disabled them. You can change your cookie settings at any time but parts of our site will not function correctly without them. [Close]

Free trials influence over half of OTT video service subscriptions

Research from Parks Associates has discovered that that over 50% of US broadband households that subscribed to an over-the-top video service within the past year indicate that the service trial played a key role in their subscription decision. 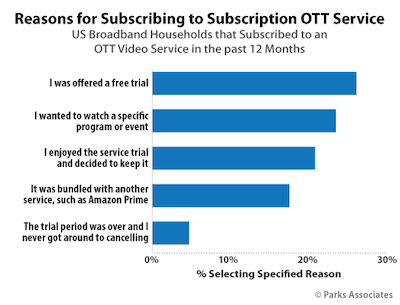 The analyst believes that the factors influencing consumer decisions in their video subscriptions and consumption have become increasingly essential to success in the US where more than 270 OTT services are vying for consumers’ attention in addition to traditional pay-TV services. The analyst cited leading options including virtual MVPDs such as Sling TV and Hulu+Live TV, ad-based services such as Pluto TV and Crackle, SVODs including Netflix, and TVODs such as Amazon Prime.

Parks noted that the recent decline in traditional pay-TV and growing popularity of OTT services have fostered the widespread belief that OTT subscribers are driven by simple economics. Even though it acknowledged that pricing certainly plays a role in decision making, other key reasons including content availability, ability to work with connected entertainment devices, and service features also significantly influence these consumers.

“The consumer's selection and purchasing journey, including trialling and selecting their video service, is multifaceted and varies among consumer groups,” said Brett Sappington, senior research director and principal analyst, Parks Associates and author of the Buyer’s Journey—Pay TV vs. OTT report. “[You need to] explore the service, content, and bundling innovations that enhance the viewer’s video entertainment experience and the challenges that the industry will face as it moves to the future.”
Tweet